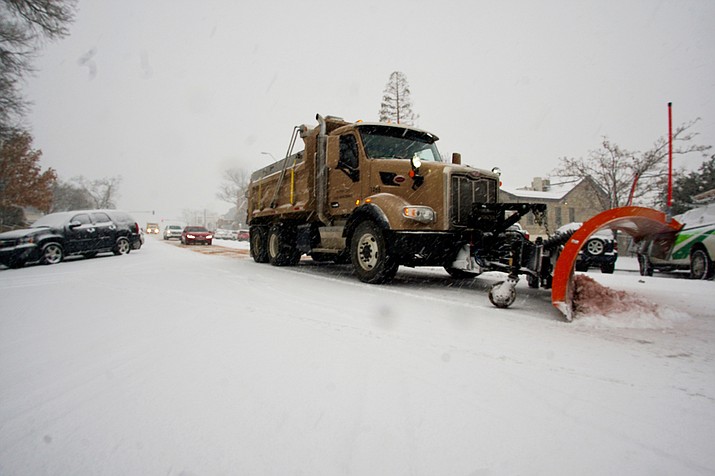 A City of Prescott snowplow clears the snow and applies a cinder treatment to Marina Street near the corner of Willis Monday morning. The fast-accumulating snow caused a number of traffic jams on downtown streets on New Year’s Eve Day, Dec. 31. (Cindy Barks/Courier)

A quick-moving storm, complicated by the holiday season and flu season, is making for some hazardous driving conditions in Prescott on New Year’s Eve day.

“The street situation is pretty bad right now,” Prescott Street Maintenance Superintendent Bobbie King said at about noon Monday, Dec. 31. “It came down so fast, and it was already so cold.”

That resulted in snow accumulating faster than usual on Prescott streets.

By mid-morning, cars were already skidding through stops in downtown Prescott, and spinning on the packed snow. A number of tow trucks were out dealing with stranded vehicles, and some drivers were attaching chains to their tires.

The city closed down the steep Elks Hill on Gurley Street in front of the Elks Theater by about 10 a.m.

Even though snowplows were distributing cinders, King noted that the continuing snowfall was quickly covering up the street treatments.

On Sunday, Dec. 30, King said her crew had been expecting two to four inches of snow to fall the next day – mostly in the higher elevations. She put workers on standby to deal with that forecast. But by Monday morning, the situation has changed.

“It’s a pretty bad storm, and it was unexpected,” King said.

By noon, she said about eight trucks were on the streets, trying to keep up with the conditions.

Compounding the situation, she said, is the fact that a number of employees are out sick or on vacation. “It’s flu season and holiday season,” she said.

The National Weather Service is predicting snow showers throughout the afternoon on Monday, with a 40-percent chance of snow showers during the night, mainly before 11 p.m.

Although Tuesday, New Year’s Day, is expected to be sunny, King pointed out that the temperature is forecast to drop to about 14 degrees overnight.

“We should be prepared for some serious winter-driving conditions,” King said.

The city’s street maintenance department expects to have seven to eight trucks out on the streets at all times, she said.

As the snow continued on Monday, several areas in the community were becoming problematic. King said driving conditions were especially bad on Rosser Street, Willow Creek Road, Sheldon Street, and Highway 89 on both sides of the Granite Dells.

As other local officials are recommending, King says the best strategy is to stay off the roads if possible. “My tip is to stay home in this kind of weather unless you absolutely have to go out,” she said.

Meanwhile, the city put out a notice early Monday afternoon that due to the extreme driving conditions and worsening road conditions, the solid waste division was unable to complete normal trash and recycling collections on Monday.

The collections will be resumed on Wednesday, Jan. 2, a city news release stated, and crews will work the remainder of the week to catch up on missed collections.

Aftermath continues from New Year’s Eve Day storm
‘We had everybody out there’: City crews work around-the-clock clearing streets over holiday
Snow storms cost city up to $50K (VIDEO)
City on clean-up: 'I've never had to deal with this much snow'
Crews respond to Monday's icy streets
Event Calendar