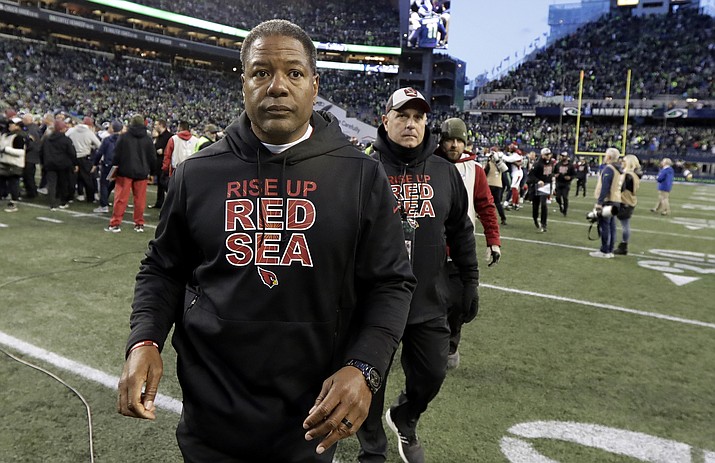 TEMPE — The Arizona Cardinals have fired Steve Wilks after just one season as head coach.

Wilks' firing Monday followed a 3-13 season, the franchise's worst record in 18 years and the worst in the NFL this season.

Wilks, 49, was hired after Bruce Arians retired following five seasons in Arizona. It was a dramatic shift in styles.

Arians was known for his flamboyant personality and dynamic offense. The low-keyed Wilks came to the job with an entire coaching resume on defense.

He was defensive backs coach at Carolina for five seasons before being promoted to defensive coordinator by Panthers coach Ron Rivera for the 2017 season.

The Cardinals zeroed in on Wilks as Arians' successor.

"In our research, they talked about what a passionate coach (Wilks) is on the field and what a terrific leader he is," team President Michael Bidwill said at the news conference announcing the hiring. "Players love playing for him."

Wilks said then that "this is not really a rebuild, this is a retool. We have the culture of winning here. We just have to be able to sustain it."

Wilks wanted to build a team centered on toughness up front and a power running game. But things fell apart quickly. The offensive line struggled even before it was decimated by injuries and the defense was susceptible to big plays.

Injuries continued to accumulate. On the offensive line, only rookie center Mason Cole made it through the season.

Arizona lost nine games by double digits, four by 20 points or more. The Cardinals were 1-7 at home, their worst record there since moving to Arizona.

The team's offense finished last in the league, where it had been all season.

But after Arizona's last-second 27-24 loss at Seattle on Sunday, players seemed unanimous in their desire for Wilks to be given a second season.

"I've let it be known, I love the man," star receiver Larry Fitzgerald said. "I think he's an unbelievable coach. It's been a tough year, and we all understand this is a results business, but it's hard for me to separate the business from the personal. I've got a heart, and I'm human. I really like coach."

With Wilks' status confirmed, there is still one major uncertainty: Will Fitzgerald be back for a 16th season?