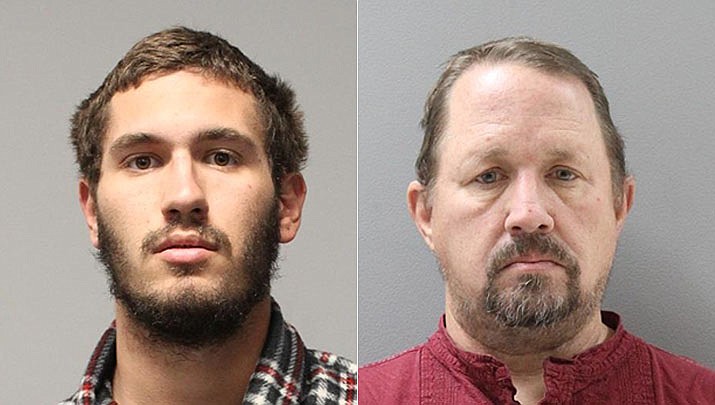 Michael Nash, 19, left, of Prescott, and Todd Reiman, 50, of Paulden were arrested on suspicion of sexual conduct with a teenager and sharing pornographic photos and videos in a chat room, according to the Yavapai County Sheriff’s Office. (Courtesy)

Paulden resident Todd Reiman, 50, and Prescott resident Michael Nash, 19, were arrested on Sunday, Dec. 23, and Thursday, Dec. 27, on suspicion of sexual conduct with a teenager and sharing pornographic photos and videos in a chat room, according to a news release from the Yavapai County Sheriff’s Office.

Deputies met with the mother of a 16-year-old girl on Dec. 23, regarding a sex offense complaint and she identified a trusted person her daughter knew who was sending her pornographic images on social media, said Dwight D’Evelyn, YCSO media relations coordinator.

“Deputies were able to view images on a cell phone confiscated by the teen’s mom and confirmed both sexual images and sexually related text conversation between the teen, the trusted adult, and another man also identified in the message stream,” D’Evelyn said, adding the social media service used was the online chat/messaging application, Kik. “During a conversation with the teen victim, it was learned the primary adult had purchased a cell phone for her with an unlimited data plan allowing use of the messaging service.”

The teenage victim explained she started receiving nude male images on the Kik account and realized it was someone she knew, identifying him as Reiman. The other male was Nash. She denied any direct sexual contact with either party at the time and said the messaging had been going on for several weeks and that both suspects knew she was 16 years old, the news release states.

Additional messaging between the victim and Reiman included self-created sexually explicit videos from him and other pornographic images. One video was of the victim in a bathroom, which was shared with numerous members who followed the Kik account.

Upon arrest, Reiman admitted to sexual contact with the victim in the previous two weeks as well as the sharing of sexual images between the two of them.

“He also admitted videotaping the victim taking a bath,” D’Evelyn said. “Several times … Reiman placed responsibility on the 16-year-old victim for encouraging his sexual exploits with her.”

Reiman was booked into the Yavapai County jail in Camp Verde on charges including sexual conduct with a minor; permit, film and distribution of a minor engaged in sexual conduct; aggravated luring of a minor for sexual conduct; and furnishing obscene images to a minor. He remains in custody on a $25,000 cash only bond.

Nash was booked into the jail on charges including luring a minor for sexual contact; and sexual contact with a minor. He remains in custody on a bond of $50,000.

The Sheriff’s Office encourages all parents and guardians to routinely check any and all social media accounts used by children and teens, and to be aware of communication devices that may have been purchased without their knowledge in order to hide access to those accounts.