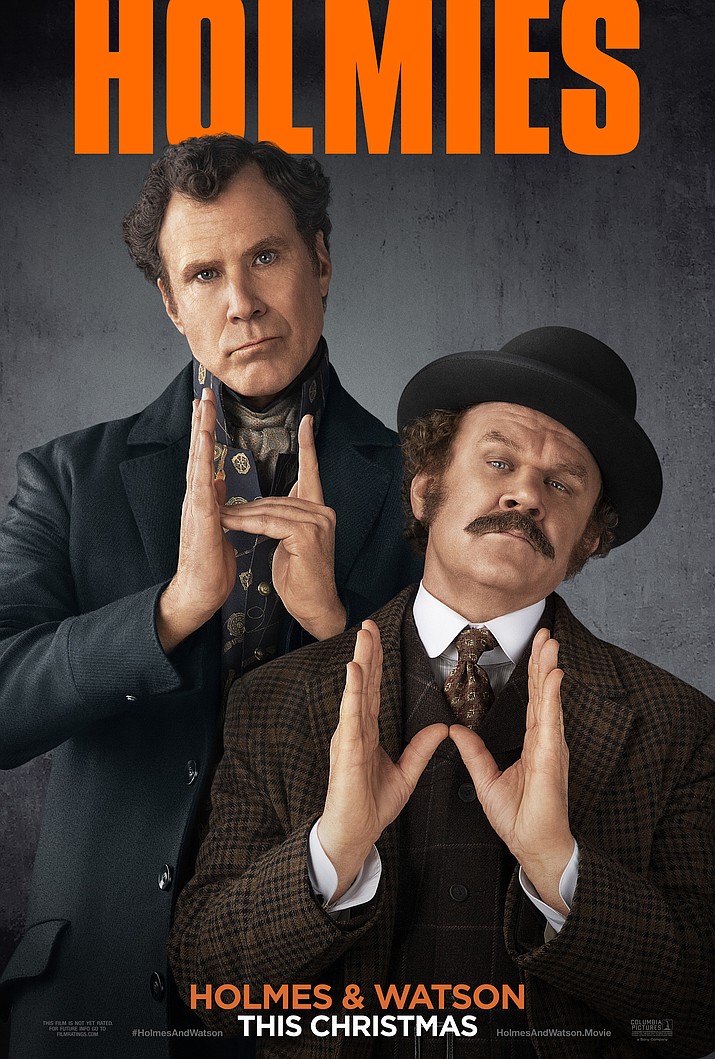 (NEW) HOLMES AND WATSON - Detective Sherlock Holmes and Dr. John Watson join forces to investigate a mysterious murder at Buckingham Palace. It seems like an open-and-shut case as all signs point to Professor James Moriarty, the criminal mastermind and longtime nemesis of the crime-solving duo. When new twists and clues begin to emerge, the world's greatest sleuth and his trusted assistant must now use their legendary wits and ingenious methods to catch the killer before the queen becomes the next victim. Stars Will Ferrell, John C. Reilly, Rebecca Hall, Rob Brydon, Steve Coogan, Ralph Fiennes. PG-13 – mystery, crime 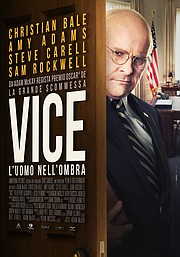 WELCOME TO MARWEN - When a devastating attack shatters Mark Hogancamp (Steve Carell) and wipes away all memories, no one expected recovery. Putting together pieces from his old and new life, Mark meticulously creates a wondrous town where he can heal and be heroic. As he builds an astonishing art installation—a testament to the most powerful women he knows—through his fantasy world, he draws strength to triumph in the real one. In a bold, wondrous and timely film, Welcome to Marwen shows that when your only weapon is your imagination…you’ll find courage in the most unexpected place. Stars Steve Carell, Leslie Mann, Diane Kruger, Merritt Wever, Janelle Monáe, Eiza González, Gwendoline Christie, Leslie Zemeckis, Neil Jackson. PG-13 – drama, fantasy

SECOND ACT - Value Shop assistant manager Maya Vargas wants only one thing for her 43rd birthday -- a promotion. While her résumé may not scream upper management, her track record certainly does. Vargas is an innovator who listens to her customers and delivers results. When she loses the job to a college-educated candidate, Maya sets out to prove to Madison Avenue that street smarts are as valuable as book smarts -- and it's never too late for a second act. Stars Jennifer Lopez, Leah Remini, Vanessa Hudgens, Treat Williams, Milo Ventimiglia. PG-13 – romance, comedy

BUMBLEBEE - On the run in the year 1987, Bumblebee the Autobot seeks refuge in a junkyard in a small California beach town. Charlie, on the brink of turning 18 years old and trying to find her place in the world, soon discovers the battle-scarred and broken Bumblebee. When Charlie revives him, she quickly learns that this is no ordinary yellow Volkswagen. Stars Hailee Steinfeld, John Cena, Jorge Lendeborg Jr. John Ortiz, Jason Drucker, Pamela Adlon. PG-13 – science fiction, action 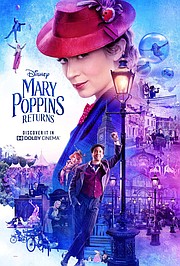 MARY POPPINS RETURNS - Now an adult with three children, bank teller Michael Banks learns that his house will be repossessed in five days unless he can pay back a loan. His only hope is to find a missing certificate that shows proof of valuable shares that his father left him years earlier. Just as all seems lost, Michael and his sister receive the surprise of a lifetime when Mary Poppins -- the beloved nanny from their childhood -- arrives to save the day and take the Banks family on a magical, fun-filled adventure. Stars Emily Blunt, Lin-Manuel Miranda, Ben Whishaw, Emily Mortimer, Julie Walters, Dick Van Dyke, Angela Lansbury, Colin Firth, Meryl Streep. PG – fantasy, adventure

AQUAMAN - Once home to the most advanced civilization on Earth, the city of Atlantis is now an underwater kingdom ruled by the power-hungry King Orm. With a vast army at his disposal, Orm plans to conquer the remaining oceanic people -- and then the surface world. Standing in his way is Aquaman, Orm's half-human, half-Atlantean brother and true heir to the throne. With help from royal counselor Vulko, Aquaman must retrieve the legendary Trident of Atlan and embrace his destiny as protector of the deep. Stars Jason Momoa, Amber Heard, Willem Dafoe, Patrick Wilson, Dolph Lundgren, Yahya Abdul-Mateen II, Nicole Kidman. PG-13 – fantasy, science fiction

INSTANT FAMILY - When Pete and Ellie decide to start a family, they stumble into the world of foster care adoption. They hope to take in one small child, but when they meet three siblings, including a rebellious 15-year-old girl, they find themselves speeding from zero to three kids overnight. Now, Pete and Ellie must try to learn the ropes of instant parenthood in the hope of becoming a family. Stars Mark Wahlberg, Rose Byrne, Isabela Moner, Margo Martindale, Julie Hagerty, Tig Notaro, Octavia Spencer. PG-13, drama, comedy

THE MULE - Broke, alone and facing foreclosure on his business, Earl Stone takes a job as a drug courier for a Mexican cartel. His immediate success leads to easy money and a larger shipment that soon draws the attention of hard-charging DEA agent Colin Bates. When Earl's past mistakes start to weigh heavily on his conscience, he must decide whether to right those wrongs before law enforcement and cartel thugs catch up to him. Starring Clint Eastwood, Bradley Cooper, Laurence Fishburne, Michael Peña, Dianne Wiest, Andy Garcia. R – crime, mystery

THE FAVOURITE - In the early 18th century, England is at war with the French. Nevertheless, duck racing and pineapple eating are thriving. A frail Queen Anne occupies the throne, and her close friend Lady Sarah governs the country in her stead while tending to Anne's ill health and mercurial temper. When a new servant, Abigail, arrives, her charm endears her to Sarah. Sarah takes Abigail under her wing, and Abigail sees a chance to return to her aristocratic roots. Stars Olivia Colman, Emma Stone, Rachel Weisz, Nicholas Hoult, Joe Alwyn. R – comedy, drama

MARY QUEEN OF SCOTS - Queen of France at 16 and widowed at 18, Mary Stuart defies pressure to remarry. Instead, she returns to her native Scotland to reclaim her rightful throne. But Scotland and England fall under the rule of the compelling Elizabeth I. Each young Queen beholds her sister in fear and fascination. Rivals in power and in love, and female regents in a masculine world, the two must decide how to play the game of marriage versus independence. Stars Saoirse Ronan, Margot Robbie, Jack Lowden, Joe Alwyn, David Tennant, Guy Pearce. R – drama, history

MORTAL ENGINES - Hundreds of years after civilization was destroyed by a cataclysmic event, a mysterious young woman, Hester Shaw (Hera Hilmar), emerges as the only one who can stop London — now a giant, predator city on wheels — from devouring everything in its path. Feral, and fiercely driven by the memory of her mother, Hester joins forces with Tom Natsworthy (Robert Sheehan), an outcast from London, along with Anna Fang (Jihae), a dangerous outlaw with a bounty on her head. Stars Hugo Weaving, Hera Hilmar, Robert Sheehan, Jihae, Ronan Raftery, Leila George, Patrick Malahide, Stephen Lang. PG-13 – fantasy, science fiction 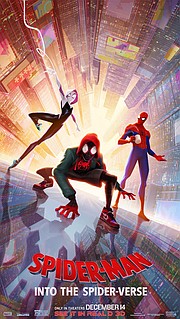 SPIDER-MAN: INTO THE SPIDER-VERSE - Bitten by a radioactive spider in the subway, Brooklyn teenager Miles Morales suddenly develops mysterious powers that transform him into the one and only Spider-Man. When he meets Peter Parker, he soon realizes that there are many others who share his special, high-flying talents. Miles must now use his newfound skills to battle the evil Kingpin, a hulking madman who can open portals to other universes and pull different versions of Spider-Man into our world. Stars Shameik Moore, Jake Johnson, Hailee Steinfeld, Mahershala Ali, Brian Tyree Henry, Lily Tomlin, Luna Lauren Valez, John Mulaney, Nicolas Cage, Live Schreiber. PG – fantasy, science fiction