It’s yoga… with a chair 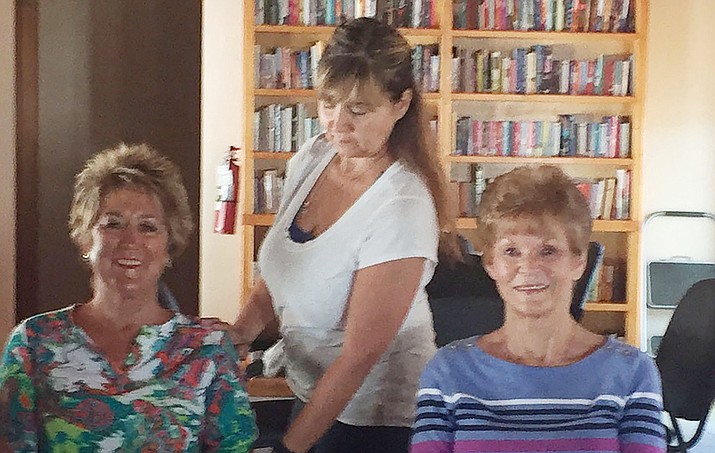 Yoga instructor Lori Wallach helps Liz Knitter position her body to get optimum benefit from the exercises. Eloise Marzec has just been assisted into the proper yoga pose. (Courtesy)

On the fourth Friday of every month, Lori Wallach instructs a Chair Yoga class at the Prescott Valley Public Library.

Wallach said she has been teaching yoga for nearly 15 years. Chair Yoga is pretty much the same thing as normal yoga done without the fear of having to get down to the floor or getting back up, she said.

Some poses are also done standing up using the back of the chair, holding onto it for balance, she said. Anyone who comes to the class in a wheelchair will do something a little bit different, Wallach said.

Every month, new people come to the class and a lot of people have been benefiting from them, she said. Recently, Wallach said she got approval to start a Chair Yoga class at the Prescott Public Library which will start in March.

For now though, Chair Yoga is offered for free in the Crystal Room of the Prescott Valley Public Library, 7401 Skoog Blvd., from 11 a.m. to noon on the fourth Friday of every month. The next class is Friday, Dec. 28.

There are quite a few benefits, both visible and invisible, when it comes to yoga, Wallach said. It increases strength and stamina and helps with balance, she said.

“It will release the stress, which of course we know causes disease, it makes you feel better about yourself,” Wallach said. “They’ve done new research that you can do some yoga poses that will actually stimulate the brain.”

Wallach said she gets all the benefits, if not more, teaching the class as she would get from taking it because she wants to help as many people as possible and feels better about herself when she can help others.

In her younger days, Wallach said she was an aerobics teacher but gave it up after getting married and having children. Once they were older though, her love of teaching drew her to start teaching yoga since she was into it at the time.

“Just kind of a natural progression,” she said.