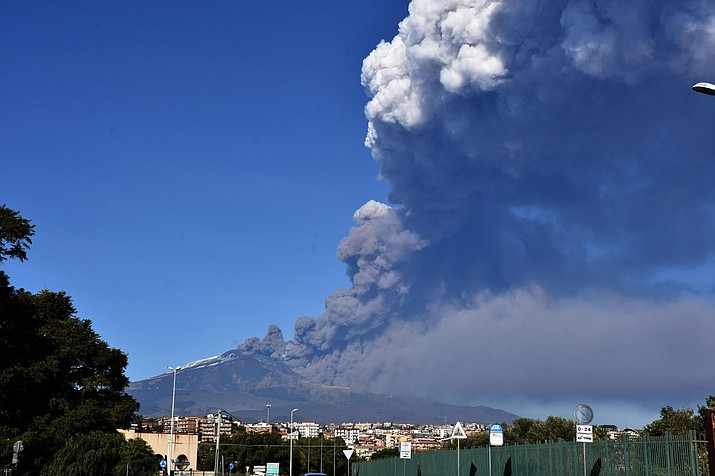 A smoke column comes out of the Etna volcano in Catania, Italy, Monday, Dec. 24, 2018. The Mount Etna observatory says lava and ash are spewing from a new fracture on the active Sicilian volcano amid an unusually high level of seismic activity. (Orietta Scardino/ANSA via AP)

Before dawn Tuesday, fiery red flaming lava shooting out from the volcano could be seen against the darkness of the night sky.

Mount Etna volcano spews lava during an eruption early Tuesday Dec. 25, 2018. Italy's Catania airport is reopening after an ash cloud from Mount Etna's latest eruptions forced it to shut down. The airport on the Mediterranean island of Sicily says it's having a limited opening Tuesday, operating four flights an hour. (Orietta Scardino/ANSA via AP)

At least 130 tremors have rattled villages on the slopes of the volcanic mountain earlier this week, with the most powerful quake registering a magnitude of 4.3 on Monday. The series of quakes appeared to be diminishing on Tuesday.

The volcano's seismological observatory says a new fissure has opened on a stretch of uninhabited slope near Mount Etna's southeast crater.

On Monday, hikers on Etna were brought down from the higher elevations for their safety. But no evacuations of villagers, many of whom work in agriculture or tourism, have been ordered.

Volcanic ash was also seen on some cars and streets near the mountain.

Etna, located on the Mediterranean island of Sicily, is one of three active volcanoes in Italy. It has been particularly active since July.