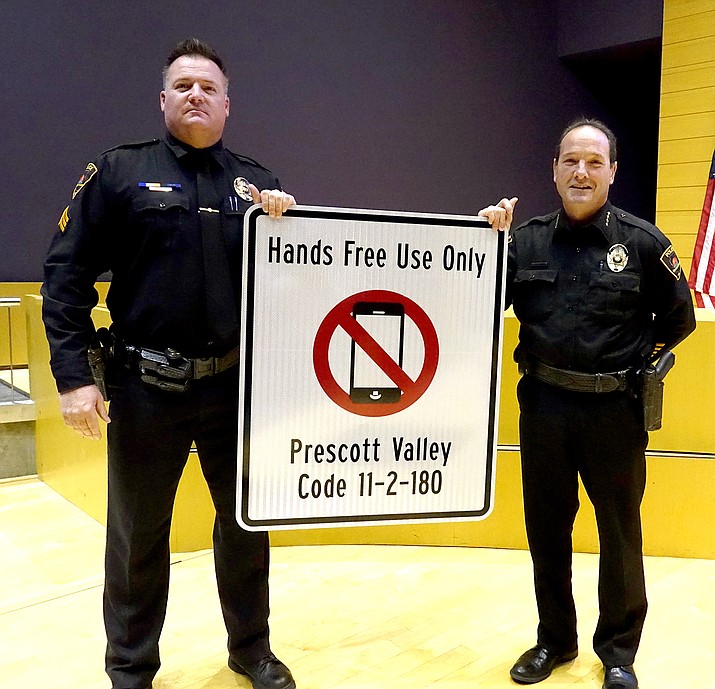 Beginning Jan. 19, drivers within the Prescott Valley town limits better put down their cell phones or use a type of holder that doesn’t include their hands.

Town council members unanimously approved an ordinance prohibiting the use of handheld mobile communication devices at the Dec. 20 council meeting.

The ordinance is similar to those approved by Yavapai County (unincorporated areas), City of Prescott and Town of Dewey-Humboldt.

Prescott Valley bans the use of any mobile communication device with either hand (including simply holding it to take a phone call) while driving any motor vehicle.

Penalties for violating the ordinance are $100 for the first offense and up to $2,500 (as determined by the judge) for any subsequent violations within 12 months of a prior offense.

PV Police Chief Bryan Jarrell said his department will conduct an information and warning campaign until March 1, essentially a grace period to get the word out.

“We have the concrete in, so we only need to drop a post in and put them up pretty quickly,” he said.

Seven signs will be set up on major roadways like Bradshaw Mountain Drive at Quailwood near Dewey, Glassford Hill Road, Lakeshore off Fain Road, and entrances into residential areas such as Viewpoint and Stoneridge. The town is working with the Arizona Department of Transportation for signage on Highways 69 and 89A.

The signs basically carry the message to bring greater awareness to driving safety for the public, Davis said. “Pay attention and concentrate on the road.”

Without a state law concerning handheld mobile communication devices, a confused mixture of ordinances across jurisdictions has been created. Some cities prohibit handheld cellphone use while behind the wheel, while others only prohibit texting while driving.

Yavapai County became just the third county in the state to pass such a handheld electronics ban with the approval of ordinance 2018-2, which went into effect Nov. 2. A violation of the ordinance can result in a $100 penalty, plus other assessments and surcharges. If the violation results in a crash the penalty could be as much as $250.

In the Quad Cities, the Prescott City Council approved a hand-held electronics ban on Oct. 23. The ordinance went into effect 30 days after that, although a grace period is in place until Jan. 1. After that, drivers violating the ban will face a $100 fine for the first offense, and as much as $250 subsequent offences within a 12-month period.

The Town of Chino Valley passed a distracted driving ordinance at its Nov. 13 meeting. Ordinance 18-859 amends Chapter 71 of the Town Code and adds section 71.14 covering the use of portable communication and electronic devices. The ban goes into effect Jan. 1, and penalties for violations may include a $125 fine, or $250 if the person is in violation of the ordinance and involved in a motor vehicle accident.

On Nov. 20, Dewey-Humboldt council members approved a resolution banning on using handheld communication devices while driving in the town.