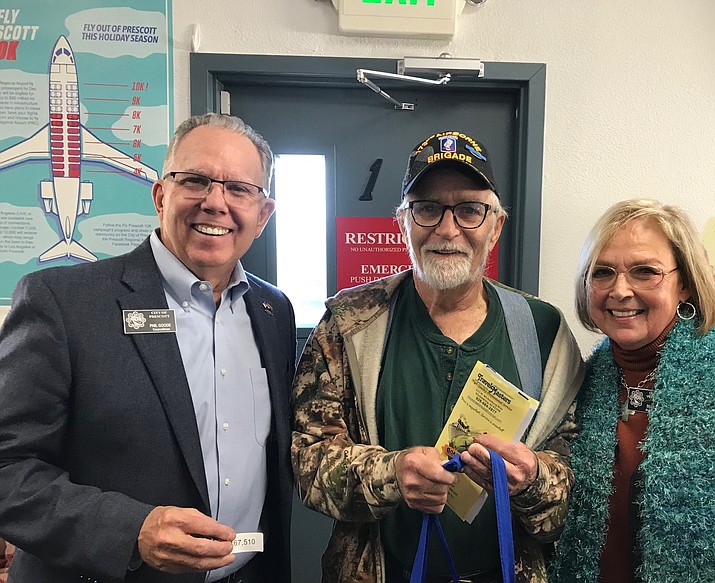 David Anderson, center, was the 9,000th passenger to board a commercial flight at the Prescott Regional Airport. He is shown with Prescott City Councilman Phil Goode, left, and Mayor Pro Tem Billie Orr, right. As a part of the city’s Fly Prescott 10K incentive campaign, Anderson won a number of prizes, which he asked to donate to charity. (City of Prescott/Courtesy)

The City of Prescott announced this past week that David Anderson was passenger No. 9,000 for the year at Prescott Regional Airport.

Anderson flew on the Prescott-to-Denver flight on Wednesday, Dec. 19. He won a two-night stay at the Hampton Inn Prescott and dinner for two at Prescott Brewing Company.

Anderson, who is a Vietnam combat veteran, asked that the prizes be donated to charity.

The 10,000-enplanement winner is expected to occur on about Dec. 29, according to a city news release. Prescott Airport Manager Robin Sobotta announced this past Tuesday that enough flights have been booked to surpass the goal of 10,000 passengers boarding flights in Prescott in 2018.

The 10,000-enplanement achievement is significant for the city, because it is the level that would trigger significantly more federal grant money for airport improvements, including a proposed new airport terminal.

The city kicked off the “Fly Prescott 10K” incentive program in November to encourage area residents to use the Prescott Regional Airport for its airline travel.

The city’s commercial carrier, United Express, offers daily roundtrip flights to Denver and Los Angeles. Flights can be booked online at United.com or on the United app on a smartphone. Customers should select airport code PRC for Prescott.