Amazing Places: Survey results - Are you an armchair traveler? 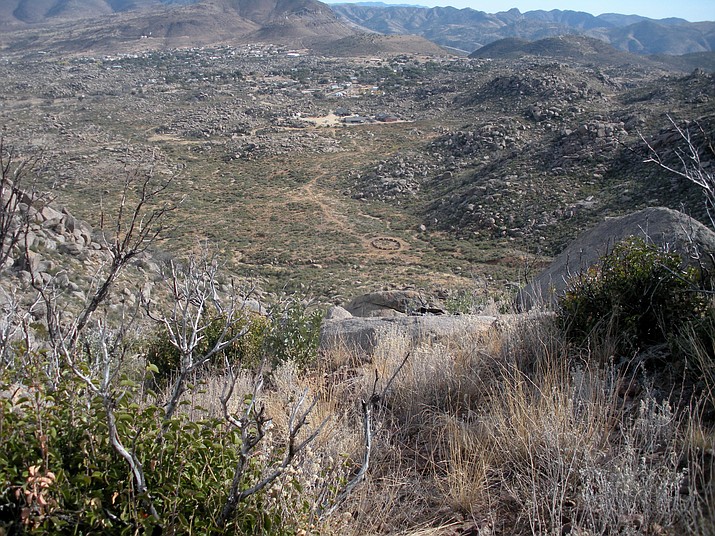 View down from the Observation Deck, with Yarnell in the distance and the circular fatality site of the Hotshots in the middle. (Nigel Reynolds/Courtesy)

My thanks to all of you who answered the survey this past week. I’ll give you the results, but first I encourage those of you who didn’t answer to send an email telling me that you usually read my column. The survey, which my column on Dec. 16 was about, gave my address as nigelaa@commspeed.net, so a brief message would be appreciated as a Christmas present, perhaps with your gender and approximate age.

If you have any comments – such as why you hate surveys (I admit I often don’t answer them) or if you have a new Amazing Place, tell me – you can go the full monty. Actually, the survey is still open for a few more days. Visit surveymonkey.com/r/AmazingPlaces.

Following are the main survey results:

• 55 people answered, and seven of those did so for family members too, so that makes about 62 readers. From other information, I know there are a lot more than that, hence my request above for an email.

• Over 50 percent were men, but I suspect some ladies didn’t answer that question.

• The majority of you live in Prescott (65 percent) with 16 percent in Prescott Valley, and 6 percent in Chino Valley/Paulden/Dewey-Humboldt. Six respondents were outside our immediate area: three in the Valley, one in Flagstaff and two in California.

• 66 percent read the articles always; 12 percent frequently; and 22 percent occasionally. Most of you had read the column from near its beginning – late summer 2017.

There was little consensus on your favourite articles. Only 32 people responded to this question. For the top three favourites:

Five other places each got four votes. Even fewer people gave their least favourites (only 16), with the Cowboy Prayer (Aug. 6, 2017) and Slates Lakes Cave north of Flagstaff (Aug. 5, 2018) both getting three unhappy votes! Interestingly, two of the favourites (Hotshots and Juniper) also got two least favourite votes. You are a diverse group of readers!

Fifty-six percent of my column’s readers do so from the print edition, while 24 percent went online. Three people said they didn’t sign up for a subscription when that became required in July. Of the 37 people who responded, 24 percent of you are armchair travelers who have never visited any Amazing Place after reading the article. Another 57 percent of you have done this less than five times, while 11 percent have visited about half of the time. The reasons for this are varied, but it mainly comes down to you being busy people. For some the driving or hiking was too far, or you had been there before.

Over 50 percent of you had heard about less than 10 of the 35 places I have described. That makes me feel good in that I am expanding your knowledge about this wonderful area we live in. About 20 percent of those who answered had previously visited over 10 of the places in my articles.

Thirty of you took the extra time to give me your comments – thank you! Many enjoyed the history I gave, as well as learning about new places. Two people complained that I was giving directions to places they felt were too sensitive. One was a friend who had told me that before and I had given him my reasons. It’s a judgment call – a few places I provide no information about the location.

For my article in a fortnight’s time (Jan. 6), we’ll be back to normal. Enjoy your Christmas celebrations and relax on Boxing Day (look it up). A Happy New Year for learning about more Amazing Places!

Nigel Reynolds was born in England and has lived in Arizona for 40 years, and in Prescott for over 20 years. “Exploring is in my blood,” he says. To see today’s or previous columns with the photos in color, visit dCourier.com and enter “Amazing Places” in the search-bar at top right – you’ll need to be a subscriber.