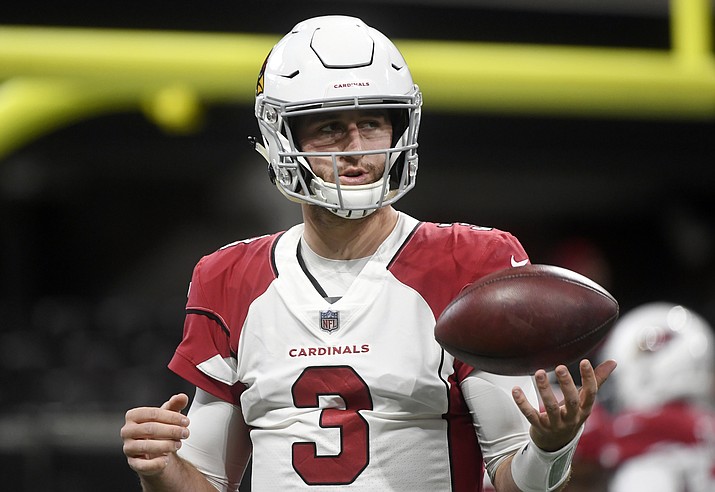 In this Sunday, Dec. 16, 2018, file photo, Arizona Cardinals quarterback Josh Rosen (3) warms up before the first half of an NFL football game against the Atlanta Falcons in Atlanta. Mired at the bottom of the NFL standings with two weeks to go in the season, the Cardinals go back to work on the practice field as they prepare to host te Los Angeles Rams on Sunday. (John Amis/AP, File)

TEMPE — Facing the final two games of a very bad season, the Arizona Cardinals are saying all the right things.

No one is giving up, they say, the effort is still there.

"We've just been decimated by injuries, and our guys are fighting their butts off," rookie quarterback Josh Rosen said after Wednesday's practice. "You can't really pick your circumstance, so you've just got to do the best with what we've all got. We're all working hard. ... Effort and commitment, that's not even close to being a question for this team. We've got a really good group of guys."

There were suggestions from outside the organization that Rosen, who had had a tough time operating behind the ever-changing cast of characters on the injury-plagued offensive line, should sit the final two weeks of the season rather than take such a beating.

Coach Steve Wilks adamantly said he was sticking with Rosen and the young quarterback balked at the idea of sitting out those last two games — Sunday at home against the Los Angeles Rams and the following week at Seattle.

Defensive lineman Corey Peters, in his ninth NFL season, said it's a matter of pride now for the Cardinals.

"This group of men, we really care about each other," he said. "There's a lot of pride in this room, so we're not going to lay down for anybody."

If the Cardinals lose their final two games, their 3-13 record will match their worst since the franchise moved from St. Louis in 1988. It's led to widespread speculation about whether Wilks will be let go after just one season as head coach.

Wilks agreed with Rosen that the effort is still there, though. Both of them pointed to Larry Fitzgerald running over a would-be tackler after a catch late in the Atlanta loss.

"Guys are still competing," Wilks said. "You look at that last part of the game, regardless of the score on both sides, the defense getting an opportunity twice to get off the field, and the way the offense finished, particularly with Larry. Fifteen years (in the NFL), and the way that he performed in that last drive was outstanding. It's just indicative of who we are and the character in that locker room."

Character hasn't been enough for a team that has eight double-digit losses, four of them by 20 points or more. But Rosen said the team has done "a pretty good job" of rebounding from losses, even if it doesn't show up on the scoreboard.

"I know we're not really bouncing off losses with resounding blowouts," he said, "but I think we come back on Wednesdays like this and Monday reviewing the film, and guys still have energy. We're still motivated and still working hard because with a lot of young guys on the team and so many rookies, guys are just excited to play in the NFL and are battling their butts off to keep a spot on the team."

The Cardinals are two-touchdown underdogs at home against the Rams.

Notes: Arizona claimed WR Pharoh Cooper off waivers from the Rams. Cooper was a Pro Bowl selection as a kick return specialist last season. In addition to his kick and punt returns, Cooper has 25 career receptions for 190 yards over three seasons. ... CB Patrick Peterson was Arizona's only Pro Bowl selection. He's made it each of his eight seasons in the NFL.