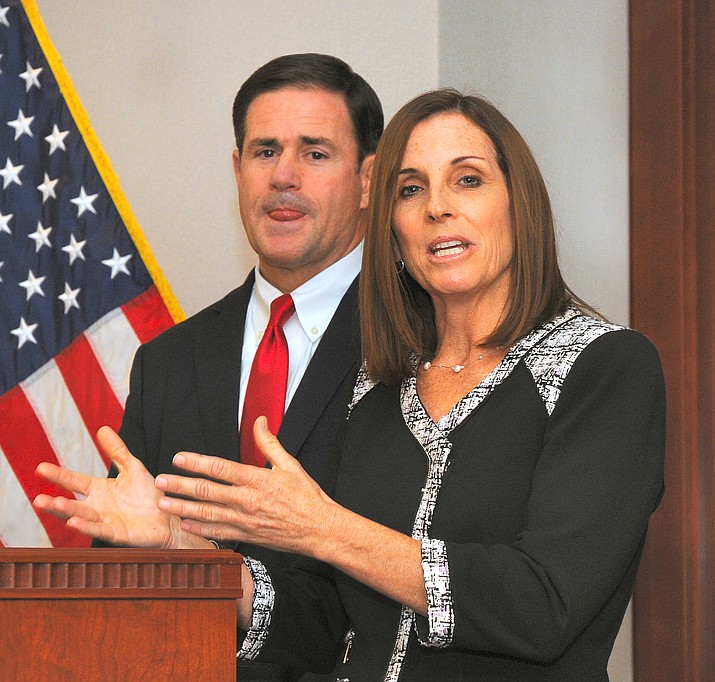 Martha McSally answers questions Tuesday on the heels of Gov. Doug Ducey appointing her to the U.S. Senate to fill out the next two years of the term of Sen. John McCain who died in August. (Howard Fischer/Capitol Media Services)

Gov. Doug Ducey has made a great decision and put Arizona first by appointing Martha McSally to the late Senator John McCain’s seat. McSally has a long history of fighting for our country and Arizonans, and will continue to fight for this state and its values in the Senate.

Kelli Ward who ran against McSally for the nomination:

I congratulate Congresswoman Martha McSally on her appointment to the United States Senate. She has served our nation honorably and courageously during her time in uniform and I look forward to working hand in hand with her on Arizona’s top priorities in the coming year. If 2018 showed us anything, it’s that the Arizona Republican Party must prepare itself for a tough fight ahead in 2020 -- and again in 2022 -- to defend this seat from a Democrat Party that is fired up and energized.

Voters rejected Martha McSally’s negative and disingenuous campaign. They rejected her plan to take away maternity care from women, and they said “no’’ to blocking 2.4 million patients from essential care at Planned Parenthood health centers. Last year, Planned Parenthood Advocates of Arizona rallied our supporters to protect the ACA. Martha McSally, on the other hand, supported legislation that would have stripped away protections for pre-existing conditions.

Congratulations to Martha McSally on her appointment to the U.S. Senate. I look forward to working with her in the next Congress. I wish Representative McSally the best of luck in her tenure to fill the seat left by Senator John McCain.

Arizona voters rejected Martha McSally. They rejected her plan to take health care away from millions of Americans. They rejected her record of putting wealthy corporations ahead of hardworking families. But now Governor Ducey is ignoring the voice of the people and forcing McSally’s disastrous judgment on Arizonans. Democrats beat McSally in 2018. We’ll do it again in 2020.

Arizona Chamber of Commerce and Industry:

Gov. Ducey has chosen a trailblazer to represent our state. From her distinguished military career, to her tenure in the U.S. House where she was one of the most effective members of Congress, Arizona is incredibly fortunate that her service on behalf of the state will continue. Gov. Ducey made an excellent choice. Martha has a proven record of championing policies that will strengthen the competitive standing of the country and state. Arizona’s job creators look forward to working with her once again.

Washington, D.C. insiders hand-picked Martha McSally to represent Arizona in the U.S. Senate. After running a divisive, dishonest campaign for over a year, Arizona voters rejected McSally because they don’t trust her to fight for them when it matters most. Mitch McConnell and Martha McSally are ignoring the will of Arizona voters to advance their agenda of putting their wealthiest donors ahead of Arizonans’ access to health care.

Arizona lost a respected independent voice when John McCain passed away. Shady backroom deals between Gov. Ducey, Sen. McConnell, & a lobbyist refreshing his Rolodex are giving the state the one candidate they definitively rejected? Martha McSally is the wrong choice for Arizona.

I congratulate my colleague Martha, for her appointment as Arizona’s new U.S. Senator. I have had the pleasure of working with her in the House and seen her be a good leader, serving her constituents well. I’m confident she will do a terrific job representing the interests of our state.

The people of Arizona have already rejected Martha McSally for this job. As a Congresswoman, she has supported a $25 billion tax windfall for oil companies and voted to block safeguards against air pollution. Her support for the fossil fuel agenda is limiting Arizona’s clean energy potential, contaminating the air we breathe, and exacerbating health disparities among Latinos, low-income families, and people of color.