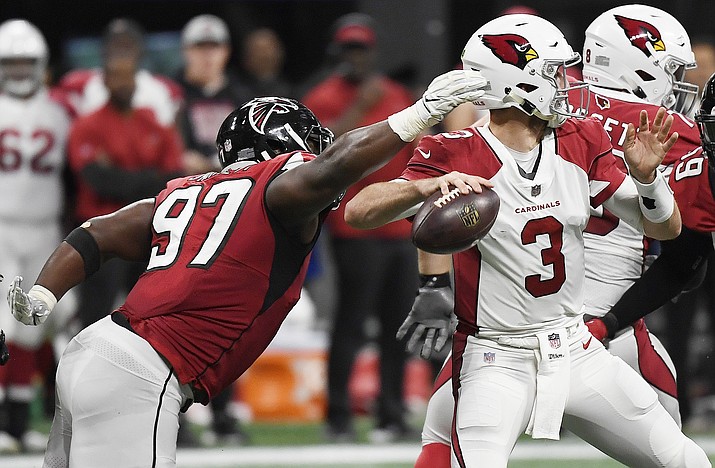 ATLANTA — It couldn't have gone much better for the Arizona Cardinals as they started Sunday's game in Atlanta by forcing two punts. In between, they drove 64 yards in eight plays to take a 7-0 lead on David Johnson's 1-yard run.

But everything went haywire from there.

"I want to start out by saying I take full responsibility for what you saw out there tonight," Wilks said. "It was unacceptable, not even close."

Arizona surrendered a season-high seven sacks behind an entire line of replacements. Rookie quarterback Josh Rosen turned over the ball three times, and the Cardinals allowed 215 rushing yards to the only NFL team with fewer yards on the ground than they had.

This was a miserable road trip to a gray, cold, rainy place, although at least the roof was closed in Mercedes-Benz Stadium.

"I look at it like the Chargers game a few weeks ago; we started out real fast, put 10 points up, and then something bad happens and we're not able to weather the storm," said wide receiver Larry Fitzgerald. "... It was just an avalanche after the start."

Moments after blunting Atlanta's second possession with a third-down sack by linebacker Haason Reddick, the Cardinals took over with good field position at their 43. On the second play, though, Rosen threw right toward Johnson, and Falcons end Vic Beasley Jr. batted the ball in the air. Linebacker Deion Jones picked it off and rambled 41 yards for a score.

Atlanta quarterback Matt Ryan was looking for something to spark the team. Jones delivered.

"That was awesome to get us going," Ryan said. "I felt like the energy that really got everybody into it, and from that point forward we played really well."

And just as the Cardinals went on to lose 45-10 to the Chargers, Arizona imploded again.

The Cardinals' next possession ended when Bruce Irvin and De'Vondre Campbell sacked Rosen.

On the next play, Falcons running back Tevin Coleman went around right end for 65 yards on the way to a career-best 145 rushing yards on just 11 carries.

Atlanta entered the game ranked dead last in the NFL in rushing, averaging 82.1 yards per game, but "defensively, we didn't do a great job of stopping the run . . . " Wilks said.

"We've got to do a much better job, and like I said, all that starts with me."

Soon after a short field goal gave Atlanta a 10-7 lead, Rosen was sacked and stripped by tackle Grady Jarrett, and nickel cornerback Bryan Poole recovered at the Arizona 34.

Maybe Atlanta's pressure didn't count as a surprise. Four of Arizona's starting offensive linemen are on injured reserve, and the team cut a right tackle several weeks ago. Plus, two key reserves are on the injured list.

So the Cardinals rolled out rookies Korey Cunningham, Colby Gossett and Mason Cole at left tackle, guard and center, along with right guard Oday Aboushi and right tackle Joe Barksdale, who left with concussion symptoms.

Was it any wonder Arizona rushed for just 60 yards on 22 carries?

"It has a lot to do with everybody, really: the timing, blocking, communicating and stuff like that,” said Aboushi, who was signed on Oct. 23. "A lot of it comes with shooting ourselves in the foot."

Not long after Rosen's fumble, Ryan scored on a 1-yard sneak for a 17-7 lead, and then another Arizona drive fizzled in part because Rosen was sacked by Poole, who was unblocked on a blitz when the quarterback forgot to check his left side.

"I took a couple of other sacks on myself when they were battling their butts off up front, and I've just got to play better," Rosen said after completing 13 of 22 passes for 132 yards, including a 40-yard completion to Johnson on his second throw of the game. "We've all got to play better, but I don't want anyone to look at those stats and think everything's on the O-line. In this game there were a couple where I was just a little mentally slow on things."

The Falcons went fast tempo after Rosen's second pick, which set up Ryan's 21-yard pinpoint pass down the left sideline to Julio Jones. He scored on a diving catch with Arizona cornerback Patrick Peterson attached like Velcro.

Not for the first time the Cardinals were undone by the second quarter, outscored 16-0 on this day and 137-34 on the season.

At least the end is near.

"It's disturbing, frustrating, you hate it, but I try to find the silver lining in everything," Fitzgerald said. "It's the holiday season, my kids are healthy . . . I'm no different than anybody else; I'm frustrated at work, but there's a lot to be thankful for."

QUESTIONS IN THE DESERT

It feels like a couple of months have passed since Arizona enjoyed a season highlight under Wilks, a 20-17 win at Green Bay two weeks ago.

The Cardinals were flat last week at home against Detroit and gave themselves almost no chance at Mercedes-Benz Stadium. Even with so many injuries, the performance was so uninspiring that Wilks might be wondering if he will return for a second season.

Arizona showed why it began the day with the league's worst scoring offense, worst passing attack and second-worst ground game.

"Obviously on the road, you can't spot people points and turn the football over like we did today," star receiver Larry Fitzgerald said. "It was just an avalanche after the start."

Julio Jones injured his ribs on the TD catch and only played a few snaps in the third with the outcome all but assured. Jones missed practice one day this week with flu-like symptoms.

Injured Atlanta running back Devonta Freeman likely won't return this season, but he was on the sideline cheering on his teammates. Tight end Austin Hooper did not catch a pass and was only targeted once as he played through a sore knee he hurt last week at Green Bay.

Johnson, playing with a sore quadriceps, ran 11 times for 33 yards and caught three passes for 68.

Beginning the game with a less than 1 percent chance of making the playoffs, the Falcons were mathematically eliminated.

"You make your bed throughout the year, and today was a good day for us as a team, but obviously not playing in the postseason is disappointing," Ryan said. "But we'll enjoy the win today and try to win these next two."