Alleged fentanyl dealer and 2 others arrested by PANT 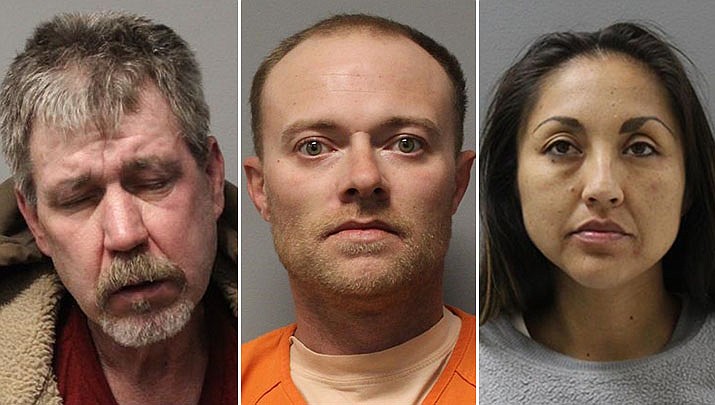 Over the past several months, PANT received information identifying 53-year-old Prescott Valley resident Todd Bearden as a dealer of fentanyl pills and powder in Yavapai County, according to a news release Thursday.

Bearden was known to buy fentanyl-laced narcotics in Mesa on a regular basis for resale in Yavapai County, authorities said.

Based on this information, detectives learned Bearden drove a gray 2001 Toyota Tundra and he used this vehicle to make his fentanyl pickup in the Valley. PANT detectives continued their investigation and eventually Bearden was stopped by Yavapai County Sheriff’s K9 deputies on Monday, Dec. 10, along Highway 69 in Humboldt, for several traffic violations.

The deputy deployed his K9 partner and received a positive alert during an exterior sniff of the vehicle indicating an illicit drug/narcotic odor. During the subsequent search to locate the source of the odor, detectives found 13 blue pills marked “M 30” and 11 other pills that indicated 15mg Oxycodone.

A test of the blue pills was positive for fentanyl, and they were duplicates in physical make-up of fentanyl-laced pills recovered in recent investigations.

During follow-up, Bearden admitted traveling to Mesa the past several months to buy pills, sometimes as many as 100 pills at a time, along with narcotic powder. Bearden claimed he did not know the blue pills contained fentanyl.

On Monday, Dec. 3, at around 9 p.m., a Sheriff’s K9 was deployed on a silver Infinity vehicle, driven by 35-year-old Christopher Robertson from Prescott, during a traffic stop on Highway 69 at Main Street, Dewey.

After an alert by the K9, deputies located four blue pills marked “M 30” and a 9mm handgun. The pills later tested positive for fentanyl and were again recognized as the “mimic” pills seen in the area known to contain fentanyl, according to a news release.

Detectives had received information in recent weeks that Robertson was possibly involved in the transportation and sale of meth and fentanyl in the Prescott area.

Further research found that deputies and paramedics from Central Arizona Fire and Medical Authority had been at his Prescott home in October regarding an overdose involving his wife. A gram of meth was also found at the time. Robertson’s infant child was on scene and as a result of the investigation, the Department of Child Safety was notified.

As the investigation continued, detectives determined apparent ongoing drug use involving the couple leading to the likelihood Roberson was transporting fentanyl to Prescott from Phoenix. After locating the suspect vehicle in the Dewey area, it was stopped for a moving violation and the K9 was used.

Since the arrest, Robertson has been released following his conviction resulting in an eight-day county jail sentence regarding a Weapons Offense and Possession of a Controlled Substance.

On Saturday, Dec. 8, at around 7:30 p.m., 32-year-old Kara Lyn Law of Prescott was contacted as the driver during a traffic stop for moving violations on Highway 69 in Prescott Valley.

She was driving a silver 2018 Ford Mustang at the time, authorities said. A large quantity of meth was recovered during the contact.

PANT had received information in recent weeks regarding meth sales in the area involving Law. During the Dec. 8 stop by Sheriff’s K9 deputies, Law opened the glove box and deputies recognized what they believed was a large quantity of meth. The package was removed and in fact contained 13 ounces of the drug.

It was later learned, Law had bought a pound of meth and already sold 3 ounces prior to the traffic stop.

After booking, deputies located 2 grams of meth Law had tried to conceal in the back of a Sheriff’s patrol vehicle. Deputies also discovered a paper trail and cell-phone texts, showing evidence of meth sales and Law eventually admitted to extensive meth sales in the area.

She was booked into the Yavapai County jail in Camp Verde on charges including Possession and Transportation of Meth for Sales and remains in custody of a $25,000 bond.

Information provided by Partners Against Narcotics Trafficking and the Yavapai County Sheriff’s Office.

Concerned citizens can contact the Yavapai County Sheriff’s Office with information or questions at 928-771-3260, the YCSO website, www.ycsoaz.gov, or call Yavapai Silent Witness at 800-932-3232.