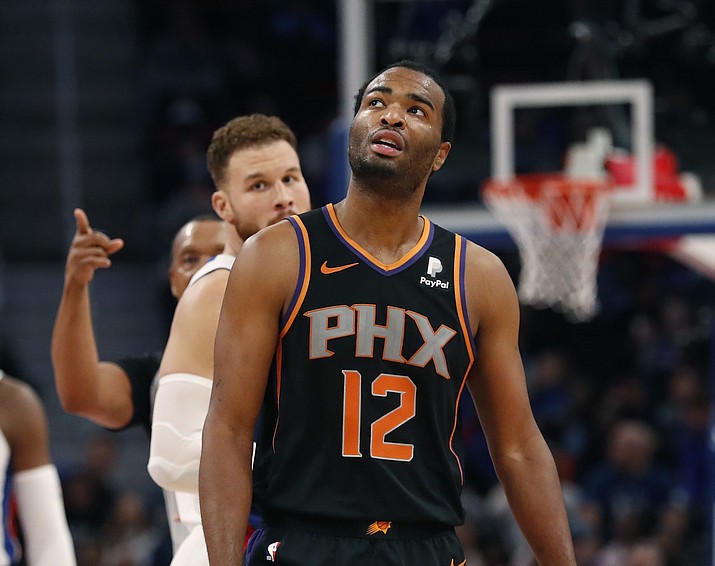 Phoenix Suns forward T.J. Warren (12) looks toward the scoreboard after a second technical foul during the first half of an NBA basketball game against the Detroit Pistons, Sunday, Nov. 25, 2018, in Detroit. Warren fouled out of the game. (Carlos Osorio/AP)

NEW YORK — Phoenix Suns forward T.J. Warren has been fined $15,000 by the NBA for directing inappropriate language toward an official following his ejection from a game.

The fine was handed down Wednesday by league discipline executive Kiki VanDeWeghe.

The incident occurred with 1:44 remaining in the second quarter of the Suns' 123-119 overtime loss to the Los Angeles Clippers on Monday night.

In his first game back after missing five with an ankle injury, Warren had just been ejected for drawing back-to-back technical fouls.

Jessica Mendoza will have more of a presence on various ESPN platforms starting next baseball season.

In 2015, Mendoza became the first female analyst for a nationally televised MLB game. She did her first Sunday night game on Aug. 30, 2015.

"Being in New York for 10 days during the World Series and appearing on a bunch of shows, I felt like it was a trial run to have more of a studio presence," Mendoza said in a phone interview with The Associated Press. "The more consistently I started to do it, the more I grew to love it. It allows me to push baseball ideas and content in a bunch of different places."

Mendoza, who has been with the network since 2007, has already been a fixture on "Baseball Tonight" for many seasons but the new agreement means she will appear more regularly on "SportsCenter" and "Get Up!"

Mendoza's main assignment will remain "Sunday Night Baseball." This will be her fourth full season but only her second working alongside Alex Rodriguez, Matt Vasgersian and Buster Olney. Mendoza said she quickly found a rapport with her boothmates. The Sunday night games will begin an hour earlier next season, at 7 p.m. Eastern.

Armbrister has a hamstring injury. Coach Steve Wilks had announced Monday that Nkemdiche, a 2016 first-round draft pick, would go on IR with a knee injury. The moves leave 16 players placed on injured reserve by Arizona this season.

NEW YORK — The NFL salary cap will increase by roughly 6 percent in 2019 to a threshold of up to $191.1 million per team, the league announced Tuesday.

The salary cap has increased by roughly $10 million per season since 2013, when it was $123 million. "Another sign of the NFL's continued success and growth," league spokesman Brian McCarthy tweeted in the announcement.

LAS VEGAS — Rays owner Stuart Sternberg will reopen the site search for a new ballpark after concluding plans for a stadium in Tampa's Ybor City area can't be finalized by this month's deadline.

Sternberg said any new ballpark can't open until at least 2024 and the team must start thinking about where it will play when its lease at St. Petersburg's Tropicana Field ends after the 2027 season.

"We'll continue to look in Tampa Bay and we'll put our efforts to that," he said during a news conference Tuesday at the winter meetings. "One way or another, we need to figure out a where the team is going to be in 2028, if not sooner. Ideally sooner. But absolutely by 2028."

Baseball Commissioner Rob Manfred has said the sport will not consider expansion until the Rays and Oakland Athletics get new ballparks. The A's announced plans on Nov. 28 for a new stadium near downtown and are working to gain approvals.

Montreal and Portland, Oregon, are seeking a team.

Tampa Bay has played since its first season in 1998 at what is now called Tropicana Field. The St. Petersburg City Council voted in early 2016 to give the Rays through December 2018 to search throughout the Tampa Bay area, and the Rays unveiled a ballpark design for Ybor City in July.