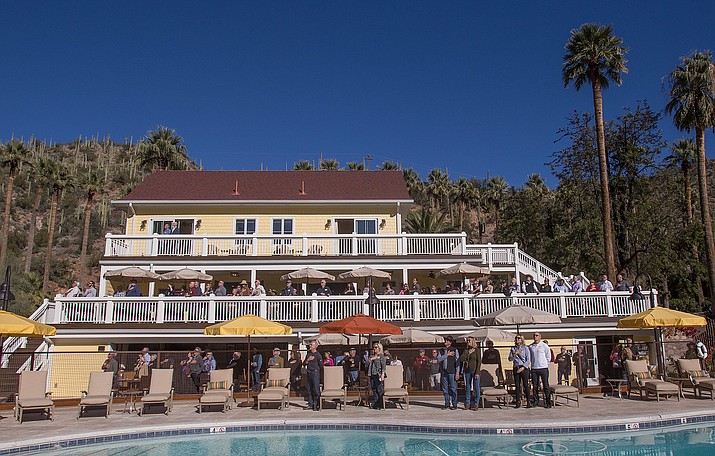 More than 300 invited guests turned out for a sneak preview of the historic Castle Hot Springs, which has been undergoing renovations since 2015. The southern-Yavapai County resort is scheduled to reopen in February 2019. (Courtesy/Patrick Rapps)

In advance of a projected February 2019 reopening, more than 300 guests got a sneak preview this past weekend of the rebirth of the historic Castle Hot Springs resort in southern Yavapai County.

The invited guests assembled at the resort on Saturday, Dec. 8, to see the nearly complete renovations at the late-1800s-era resort.

Along with a look at the restored resort and hot springs, the guests sampled culinary creations harvested directly from the Castle Hot Springs organic farm and prepared by Executive Chef Christopher Brugman and Westroc’s Charles Wiley.

“Also introduced to the crowd was the first batch of Castle Hot Springs Lithium Lager, a crisp clean beer brewed from the pure hot springs water by Helios Basin Brewery in Phoenix,” states a news release from the resort.

It adds that the resort has been largely deserted for more than 40 years – ever since the Dec. 11, 1976 fire that was sparked out of the hotel lobby fireplace.

The fire transformed the historic resort into a “smoldering pile of ashes,” the news release states, adding that members of the Talley family, owners of the resort, rushed into the burning building to salvage what they could of the Native American rugs and art.

“Following the fire, they decided not to rebuild the resort, and Castle Hot Springs became a shuttered ghost town,” the release added.

After changing hands a number of times over the late 20th century, the 210-acre resort was purchased in 2014 by local business owners Mike and Cindy Watts, who teamed up with Westroc Hospitality, managing director of the Sanctuary Camelback Mountain Resort, Hotel Valley HO, and Mountain Shadows.

The goal was to restore Castle Hot Springs to its original grandeur. The early results of work that has been underway since 2015 were on display at the Dec. 8 event.

“The raising of the American flag high atop Salvation Peak highlighted the afternoon,” stated the resort’s news release. “A U.S. flag had adorned this mountaintop site overlooking Castle Hot Springs for 80 years prior to the fire in 1976.”

After encountering construction delays because of damage from severe summer monsoon storms, Castle Hot Springs is scheduled to reopen on Feb. 1, 2019, with 15 luxury accommodations. The final stage of 17 more sky-view cabins is set to open in the spring.

Castle Hot Springs is a member of the Small Luxury Hotels of the World, and reservations can be made by calling 877-600-1137.