Kansas back to No. 1 in Associated Press men's hoops poll
College Basketball 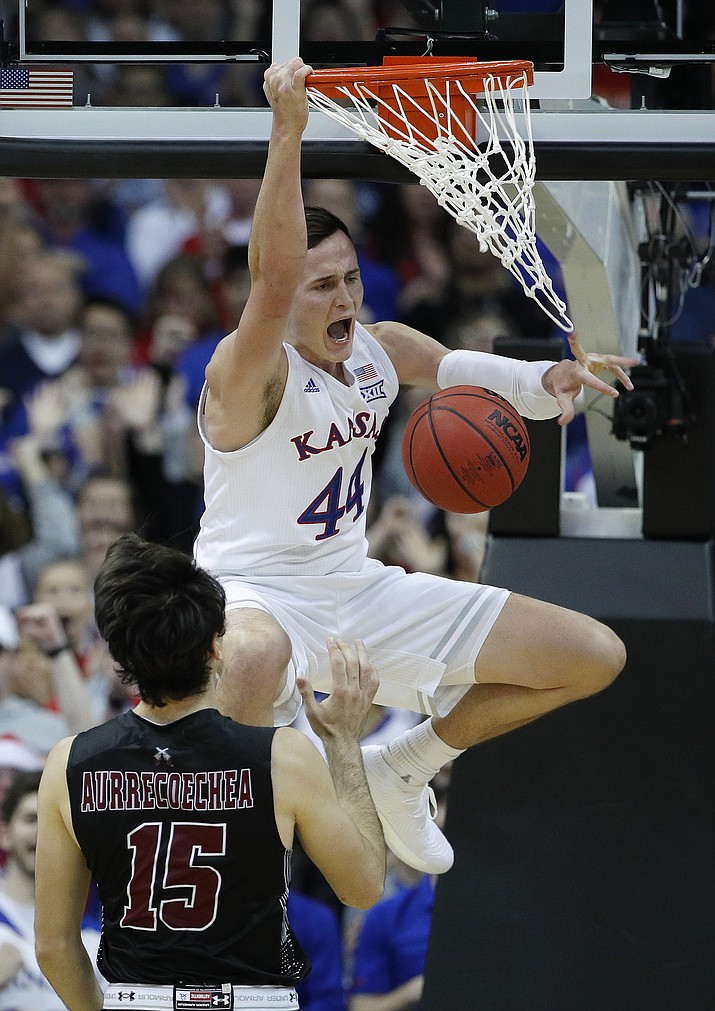 Kansas' Mitch Lightfoot (44) celebrates after getting past New Mexico State's Ivan Aurrecoechea (15) for a dunk during the second half of an NCAA college basketball game Saturday, Dec. 8, 2018, in Kansas City, Mo. Kansas won 63-60. (Charlie Riedel/AP)

The preseason No. 1, the Jayhawks are again the top-ranked in The Associated Press Top 25 despite struggling to get past New Mexico State at home. Kansas received 57 first-place votes from a 65-person media panel in the poll released Monday, sliding into the top spot after previous No. 1 Gonzaga lost to Tennessee.

No. 7 Nevada, Auburn, Michigan State and Florida State rounded out the top 10.

The Jayhawks were the preseason No. 1, but dropped a spot after Duke decimated then-No. 2 Kentucky to open the season.

Gonzaga moved to No. 1 after beating Duke in the Maui Invitational title game, lasting two weeks before losing 76-73 to the Vols Sunday in Phoenix.

Kansas (8-0) kept winning, though needed a big game from Dedric Lawson to beat New Mexico State in Kansas City on Saturday. Lawson, a preseason All-American, had 20 points, including the final 14 for Kansas, and 10 rebounds in the tighter than expected 63-60 victory.

Kansas played without center Udoka Azubuike, but coach Bill Self was not buying any excuses for the struggles.

It was good enough to get the Jayhawks past the Aggies — and move to No. 1.

Tennessee picked up its biggest win in four seasons under coach Rick Barnes by knocking off Gonzaga in the Colangelo Classic.

The Vols (7-1) kept their poise and made the biggest plays down the stretch, holding off the Zags 76-73 after Admiral Schofield scored 25 of his 30 points in the second half and hit two key 3-pointers.

The victory was Tennessee's first over a No. 1 team since beating Kansas in 2010 and Barnes' first in 31 years as a head coach.

Furman moved into the poll for the first time last week, thanks to a resume that includes wins over 2018 Final Four teams Villanova and Loyola-Chicago.

The Paladins (10-0) moved up two spots in this week's poll to No. 23 after beating Elon and South Carolina Upstate.

This week's poll had a rarity: Three teams tied for the final spot.

The Hoosiers are ranked for the first time since climbing to No. 3 in 2016-17. The Orange moved back into the Top 25 after beating Northeastern and Georgetown.

The Wildcats dropped nine spots from No. 16 after losing to Tulsa.

Tennessee matched the biggest climb of the week, moving up four spots from No. 7.

No. 19 Kentucky had the largest drop this week, losing 10 spots to No. 19 after losing to Seton Hall in overtime. Kansas State was next at nine.

In addition to Syracuse and Indiana, No. 21 Marquette and No. 24 Houston each moved into the poll this week.

The Cougars are ranked for the first time since hitting No. 21 last season and the Golden Eagles are back in the poll after dropping out in Week 3.

One AP voter opted to leave five teams off his ballot because none have played a true road game.

Graham Couch of the Lansing State Journal did not include Kansas, Duke, Tennessee, Auburn, Texas Tech, Kentucky, Villanova or Texas.

Gonzaga passes Kansas for No. 1 in AP poll, Duke is No.3
Sun Devils move up only one spot to No. 17 after Kansas upset
Tennessee remains at No. 1 in AP poll, ahead of Duke
Gonzaga becomes season’s 6th team to hit No. 1 in AP Top 25
New No. 1 expected following Kansas’ loss