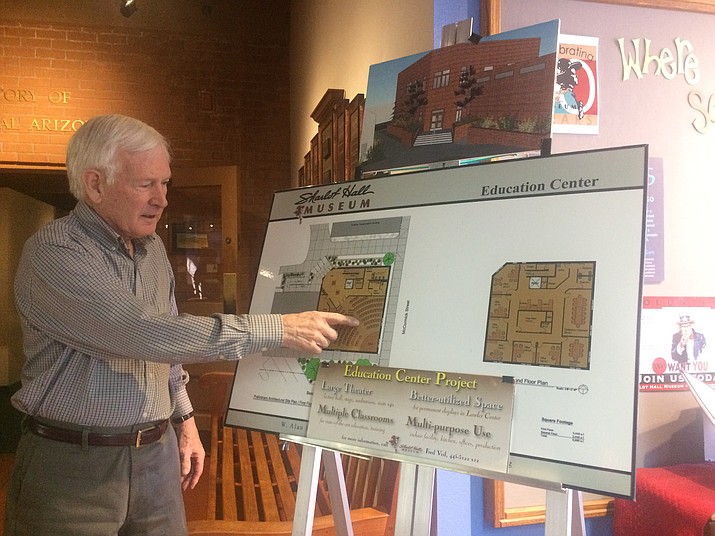 The Sharlot Hall Museum is poised to begin work on an expansion two years in the making with January 2019 as a target date for the beginning of construction, said Museum Executive Director Fred Veil.

Plans for the project, a new education center, started in the summer of 2016 and thanks to a successful capital campaign, about $2.3 million to $2.4 million is available for it, Veil said, identifying capacity as the reason for the expansion.

“We needed a larger space,” he said.

The space currently being used for educational programming is inadequate, Veil said.

Right now, the museum has a theater that can seat about 50 people and the West Gallery can hold about 70 and too often people have been turned away from various programs, he said.

The new facility will have an auditorium with theater-style seating for about 135 that also functions as a multi-purpose room available for functions, Veil said.

Additionally, after completion of the prehistory exhibits in the Lawler building, there isn’t any more space for exhibits, he said. Once the education center is completed, there will be more room, said Media and Marketing Manager Ken Leja.

“It will free up … the exhibit space that we definitely need,” Leja said. “Then we can consolidate everything to there, have a larger auditorium to be able to put on larger presentations, particularly as it relates to the education side.”

The Sharlot Hall Museum has about 40,000 objects and probably less than 10 percent of them are on exhibit, Veil said. While he isn’t sure what that amount will increase to once the space is free, it will be more, he said.

The museum’s ability for educational programming in terms of the kinds of things that can be offered will expand as well, Veil said.

Facilities on the second floor will serve as classrooms containing modern smart technology, he said.

Originally, it was thought that construction would begin this year, but there was an unexpected setback, Veil said. When the civil engineer did the soil sampling, it was found that the stability of the soil on which they were going to build was unsustainable for a building, he said. The recommendation was digging out the entire footprint down to about 14 feet and re-compacting it with new soil, Veil said.

“We concluded that if we’re going to dig it out, why not put in a basement,” he said. “It turned out to be a good thing for us because while it costs more money than we had anticipated, it’ll be at the same level as the basement in this existing building, Lawler, which will enable us to have a passageway through it.”

About 3,500 square feet will be added to the collection storage, Veil said.

The hope is to have everything completed by the end of next year with the new center open by 2020, he said.