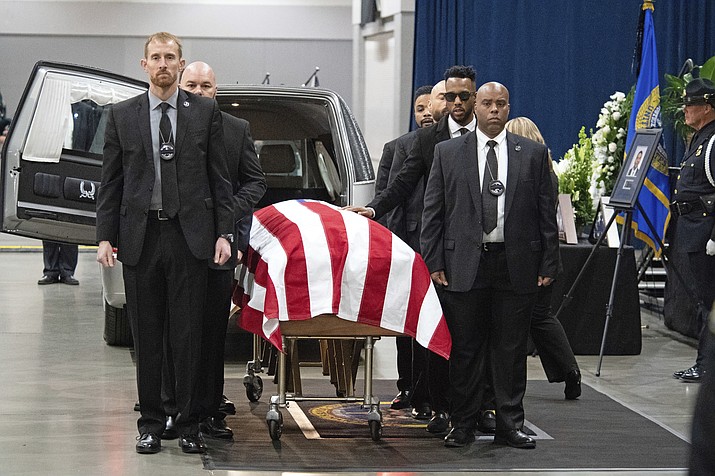 U.S. Marshals escort the casket inside the Tucson Convention Center in Tucson, Ariz., for the Celebration of Life ceremony for fallen U.S. Marshal Deputy Chase White on Friday, Dec. 7, 2018. White was shot and killed while serving an arrest warrant on Nov. 29. (Shane T. McCoy/U.S. Marshals Service via AP)

"The entire law enforcement community mourns his loss and we honor his sacrifice," Matthew G. Whitaker said in statement issued the day of a funeral for Chase White. "I hope that all Americans will join me in praying for his family."

The U.S. Marshals Service helped organize the service at the Tucson Convention Center, which it estimated was attended by about 2,000 people. A line of Tucson Police Department motorcycle officers led the funeral procession to the center, and rows of uniformed law enforcement officers from the Marshals Service and other agencies assembled inside.

White was shot Nov. 29 when he and other members of the Marshals Service were outside a home in northern Tucson to deliver a warrant to Ryan Phillip Schlesinger for stalking a female police sergeant.

The Marshals Service said the deputy U.S. marshal was the first killed in the line of duty in Tucson in 66 years.

White, 41, had been with the U.S. Marshals Service since 2015. He was on active duty in the Air Force from 2000 to 2007 and was currently a lieutenant colonel in the Air Force Reserve, serving with the 926th Wing at Nellis Air Force Base, Nevada. He was scheduled to leave for a deployment this week.

The Illinois native is survived by a wife and four children

After a standoff, Schlesinger was arrested on a separate warrant accusing him of first-degree murder of a federal officer. He could face the death penalty or life in prison. The federal public defender representing Schlesinger has not commented on the case.