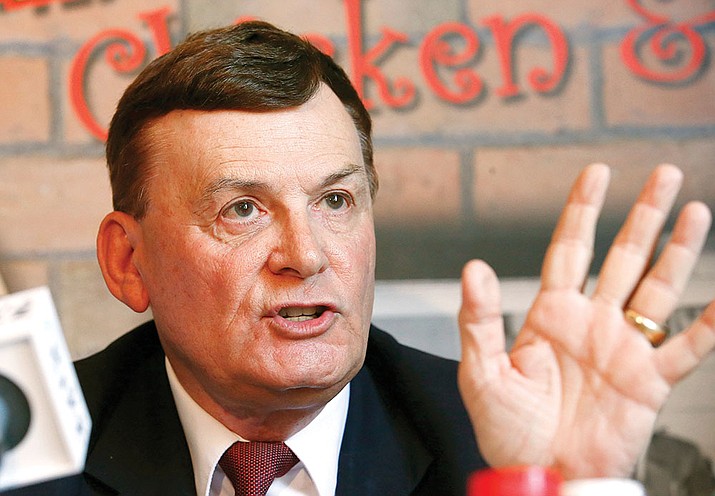 State Rep. David Stringer, R-Prescott, speaks at a community forum June 27, 2018, in Phoenix, to explain his remarks when he said “there aren’t enough white kids to go around” when discussing integration. (Ross D. Franklin/AP, file)

State Rep. David Stringer said Thursday night, Dec. 6, he has no intention of resigning despite a controversy swirling around him.

Stringer spoke at a Prescott Valley Town Council study session. State Rep. Noel Campbell and Senate President-elect Karen Fann also were in attendance for a discussion between them and Prescott Valley town staff about this year’s focus points.

Stringer, R-Prescott, said he was elected by the voters of the entirety of Legislative District 1.

Stringer, who lives in Prescott, was recorded in November telling Arizona State University students that non-English-speaking immigrants cause a “burden” to the U.S. and that African immigrants “don’t blend in.” The comments were then published by the Phoenix New Times.

Stringer says that his statements were “misreported” and that anyone who wants to know exactly what he said can easily find out by listening to the full audio or reading the full transcript, which is available in multiple locations online.

“I believe everything that I said, if you look at what I actually said, is defensible, that it is truthful, that it is factually accurate, that it can be supported by academic research,” Stringer said, adding after the meeting that “I think the piece that first came out in the Phoenix New Times … was a hit piece and those comments have been picked up by other media outlets who are not necessarily trying to do hit pieces, but because they don’t have the audio or because they’re not listening to the audio or reading the transcript, they just keep repeating the same sound bites.”

When he said that non-English speaking students are a burden to the state of Arizona, he was speaking in the context of budget allocations made to support extra funding for English as a Second Language (ESL) education, he said. Seven percent of the school population in Arizona are English language learners, which includes children in ESL classes who are American citizens entitled to an education, and in the budget is an 11.5 percent extra payment to schools for English language learners in addition to millions of dollars spent for compensatory education, bonuses paid to ESL teachers for every student reclassified as English language proficient and federal money, Stringer said.

It’s a lot of money that comes from the taxpayers, he said. Further, it impacts the immigration issue because the law requires the education of the children of immigrants, Stringer said.

“It’s the law we have to do it but it is a financial burden. I don’t know how else you could say that. It is a financial burden to the state of Arizona, to the taxpayers of Arizona to be having to spend millions of extra dollars on ESL education,” he said, noting he completed his master’s degree in ESL and his capstone project was on Structured English Immersion, which is what is used in the state of Arizona.

“It’s supported by the budget, it’s not something I just made up, it’s not a pejorative, it’s not saying that these are not good kids and don’t deserve an education. That’s not what I said. I just pointed out that as a state we spend, we’re required to spend, a lot of extra money on ESL education.”

In response to Stringer’s comments in November, there have been multiple calls for his resignation, he has been banned from all campuses within the Humboldt Unified School District, and Prescott faces a travel boycott by the East Valley NAACP.

Due to the statements Stringer made in June that went international and his most recent comments, it’s at the point where when he goes to speak before a group, camera or radio station, the minute people hear his name, they will either wonder what he’s going to say next or turn themselves off, Grossman said.

In a June speech to the Republican Men’s Forum in Prescott, Stringer said new immigrants — especially those from non-European countries — do not assimilate as easily as those who came a century earlier. He also said the rapid influx of Hispanic children has made school integration impossible because “there aren’t enough white kids to go around,” not only because of the pure numbers of immigrants but because Anglo parents choose to either move to new areas or simply put their children in private or charter schools.

“Your effectiveness as a representative of this area is zero. In fact, it’s minus zero,” he said. “We cannot have a representative saying the things you’re saying. You can have those personal opinions, but the fact that you’re a state representative and you’re supposed to represent all of the people; those comments are totally wrong and they should not be said, especially in public.

If Stringer really loves the community, the best thing he could do for it is to resign and let someone else step in who will do the job and be effective, Grossman said.

Rooney said that when she hears someone make racially charged comments about people different from themselves and believes it’s defensible, truthful and accurate, she has a problem.

“I try to represent as best I can and listen to people and work alongside them, and when I hear of people trying to put down other people through these racially charged remarks, I’m not okay with that,” she said. “Racially charged comments will not be tolerated. Period.”

Rather than defending Stringer, Campbell said he defends Stringer’s First Amendment right to free speech and not be run out of office because you say something that somebody doesn’t like.

“That’s the whole purpose of the First Amendment, to protect unpopular, hateful speech as long as it doesn’t cause eminent violence,” he said, also encouraging everyone to read the full transcript. “His comments were racially insensitive, but are they racist remarks? I’ll let every individual who reads the full remarks make their own mind up.”

The calls for resignation are people’s opinion and they can think anything they want, Campbell said, stating he stands firm that “only the voters can get rid of David Stringer” and that he would “resist any attempts to try do that any other way because 67,000 people know this guy, they know his remarks and they voted for him. So let them deal with the problem.”