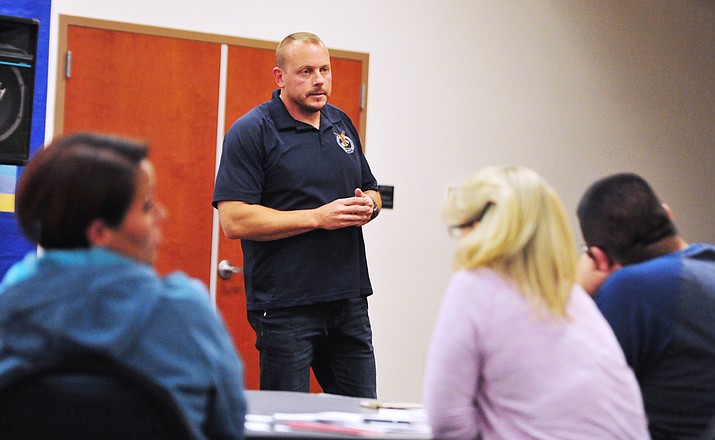 The number of sources for purchase of fentanyl in Yavapai County reportedly has declined in recent weeks.

Nate Auvenshine, commander of the Partners Against Narcotics Trafficking (PANT), told a group of parents and community members in Prescott Valley this week that his officers are reporting fewer people selling fentanyl.

“In briefing with my guys today, I said, ‘where are we at on these fentanyl targets?’” Auvenshine said. “There are a lot fewer than there were just a couple of weeks ago.”

He attributes that to the community campaign that has been underway since the Nov. 3 accidental overdose deaths of two 19-year-olds in Prescott Valley. Law enforcement reported in mid-November that the deaths were the result of an accidental overdose of illicit drugs and fentanyl intoxication.

The news of the deaths of the two men, Gunner Bundrick and Jake Morales, prompted a community outcry and the launch of a campaign to stop the illegal fentanyl use.

“When this county starts cracking down on this stuff, people really back off,” Auvenshine said.

About 25 people turned out to hear a panel of experts, including Auvenshine, talk about current trends regarding alcohol, marijuana, vaping and opioids in the community.

In response to a question from an audience member about whether the eight recent fentanyl-related arrests reported in Yavapai County were a “drop in the bucket,” Auvenshine maintained that the arrests show significant progress.

“I personally feel that it’s more than a drop in the bucket,” he said. “I believe that we’ve put a good dent in it.”

He stressed that the problem with fentanyl continues, however.

“Are there more people out there still selling fentanyl? Yes, there are,” Auvenshine said. “And we’re going to continue to pursue that and everybody else that’s selling drugs in this county that we can get a case on and make an arrest on.”

As a part of the heightened awareness about the dangers of fentanyl, Auvenshine said PANT has received more tips from the community. And he pushed for a continuation of that community information.

“Don’t assume we know about somebody,” Auvenshine told the crowd, noting that information came in after the two Prescott Valley deaths. “When we got that information, I was glad to have it. But it was also concerning that people had that information and didn’t share it until the tragedy occurred.”

And of the recent dip in fentanyl suppliers, Auvenshine cautioned that the results would not be permanent. “It’ll rise back up; it’s temporary,” he said. “But it makes an impact.”

Much of the forum discussion focused on how parents can alert their children to the dangers of drugs, including alcohol, marijuana, and vaping.

HUSD Superintendent Dan Streeter told the crowd that drug- and alcohol-related offenses have shifted dramatically over the past year or so.

While tobacco/cigarette use has virtually gone away, Streeter said, “Vaping has gone through the roof.” The offenses have been occurring throughout the district — in elementary, middle school, and high school, he added.

Nikki Rosson, executive assistant with MatForce, told the audience that vaping (inhaling and exhaling vapors from an e-cigarette) “is a huge, huge issue,” because it can lead to addiction to nicotine and THC, the main chemical responsible for marijuana’s psychological effects.

“I would call it a vaping epidemic,” Streeter said, adding that any type of vaping paraphernalia is prohibited on HUSD school campuses.

Along with the vaping violations, Bradshaw Mountain High School has had two alcohol violations and two marijuana violations, Streeter said.

Rosson urged the parents in the audience to talk to their children about the stresses that might lead to drug use. She said surveys have shown that young people cite stress and sadness as among the top reasons for using drugs and alcohol.

“Kids are having this stress, and they don’t know how to deal with it,” Rosson said. While acknowledging that it might “feel dorky,” she urged parents to play-act with their children on how to deal with situations in which they are being pressured to use drugs or alcohol.

Tools and ideas on how to talk with children about drugs and alcohol are available online at: www.drugfreeAZ.org.

Presentation informs parents on dangers of vaping
Marijuana-infused vapes causing problems for youth in the Quad Cities
How to talk to youth about the dangers of drugs
Community fights teen vaping epidemic
HUSD parent forum to address trends in alcohol, drug use
Event Calendar