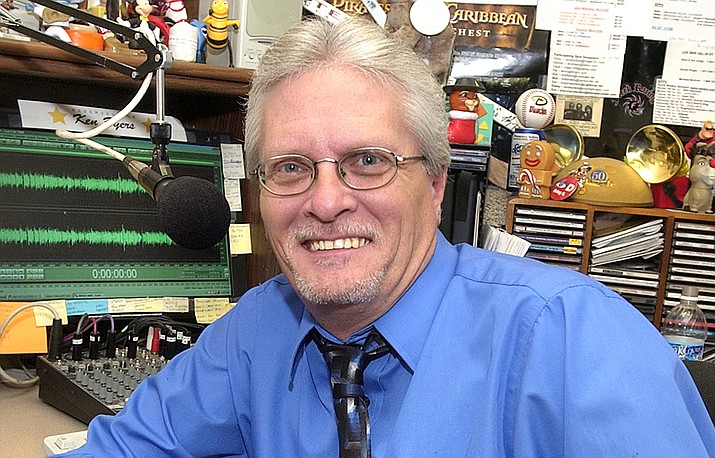 Kenneth W. Byers passed away Dec. 5, 2018, peacefully at home. His heart and mind were not ready to go, but his body was ready to rest.

Ken is survived by his wife, Shannon of Prescott, Arizona; their daughter, Charlotte of Phoenix, Arizona; his sister, Phyllis Lantz of New Cumberland, West Virginia; and his brother, Greg Byers and his wife Terry of Winterville, Ohio. He is preceded in death by his parents, Phil B. Byers and Doris L. Byers of Weirton, West Virginia.

Ken was born on March 7, 1956, in Weirton, West Virginia. He graduated from Brooke High School in 1974. He followed in his father’s footsteps and joined the electrical union IBEW Local 246. In 1988, Ken moved to Arizona and began his broadcast career. He started at a small station in Coolidge, Arizona, KCYA having never been in a radio station before. He quickly realized this was his calling. He then took a position at KTAR in Phoenix, and learned all of the ins and outs of broadcasting. In 2001, Ken began his illustrious year career with Arizona’s Hometown Radio Group in Prescott, Arizona. He got to live out his dream of entertaining people and helping the community. Ken was passionate about his job and dedicated his life to it. Above all, he loved his co-workers and the people he met through his work. He volunteered with many local nonprofits and it meant a lot to him to give back.

Ken met his wife, Shannon in 1999 and they married in 2003. Together, they raised their daughter, Charlotte. They took pride in the fact that they laughed every day and told one another that they loved each other constantly. Ken loved his “girls” and was proud of his family. Ken was a wonderful father and husband, and will be missed so deeply.

The family would like to thank Compassus and particularly his hospice nurse, Christine, for all of her dedication and support during these last few months. She made such a difference in such a heartbreaking time.