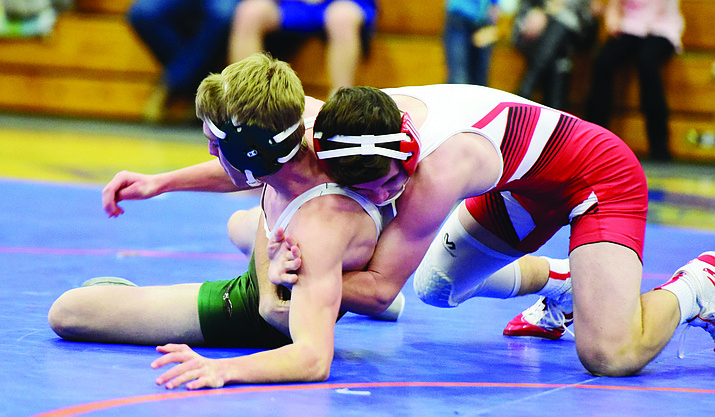 With their 69-12 and 71-12 wins over the Eagles and the Bears, respectively, the Cougars remained undefeated in dual meets this season at 13-0.

The Cougars are among the top two or three teams in their section and they have the capability to place in the Top 5 at state in February at Prescott Valley Event Center.

“We’re headed in a really good direction right now,” Rock said of the Cougars. “We started off a little slow [Wednesday]. But we went to Wickenburg last week and we looked really solid. Once we get a few more things down in the practice room, we’ll keep rolling.”

While the Cougars went 2-0 on Wednesday, Bradshaw Mountain finished 1-1 and Flagstaff was 0-2. The Bears defeated Flagstaff, 59-24.

“This is a phenomenal team – I’ve never seen a team like this before at Chino Valley, except for my freshman year,” Payne said. “We’re going to take sectionals, and we might even take state with this team.”

Added Chino Valley coach Kevin Giese, “At this point, we’re where we need to be. We’ve got a lot of tough wrestlers. There’s still a lot of things we need to improve on – some balance issues, some hunting for halves, just a lot of basic stuff.”

“Usually we start out really slow, and when something bad happens we’re usually mad at ourselves,” Colby Evens said of the Cougars’ team. “We get that anger out of us, and we show it really well.”

Only two Bears won their matches versus Chino Valley, including 138-pounder David Medevielle and 160-pounder Enrique Arcenas, both by pin. Bradshaw Mountain forfeited at 113 pounds and 170 pounds. Sam Denman, at 138, is nursing a dislocated elbow and should return in a couple weeks.

Bears coach Brad Grauberger said he hopes four or five of his wrestlers can qualify for the D-III state meet. Medevielle, Arcenas, 120-pounder Blake Huenemeyer, Denman and 132-pounder Titus King are ones to watch.

“Enrique’s going to be a good one,” Grauberger said. “He’s one of our wins leaders – he’s got 13 on the year. We battled [against Chino Valley], and we’re close. We’re still young, but we have a stronger room [this season]. Every week we get better. I’m happy.”

Chino Valley will compete in a four-team dual meet against Mohave, River Valley and Kingman at 3 p.m. Wednesday, Dec. 12, at Kingman High School.