Prescott council calls for Rep. Stringer's resignation
Political parties not happy with him either 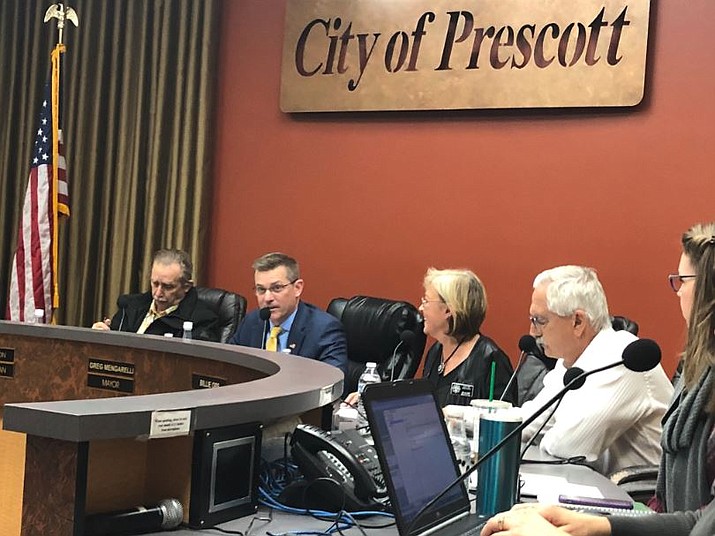 The dissenting vote was cast by Councilman Phil Goode, who said he believed the council is the wrong body to be calling for Stringer's ouster.

Stringer recently was recorded telling Arizona State University students that African-Americans “don’t blend in,” among other things, and subsequently lost a House of Representatives chairmanship over the comments.

Click HERE for a story about Stringer's recent comments.

Click below for the full audio of Stringer's comments.

Click below for the video of the City Council meeting.

Officials from both the Democratic and Republican parties in Yavapai County have weighed in as well.

"I share Rep. Stringer’s concern regarding assimilation of immigrants. However, I believe that this is best accomplished by providing a welcoming environment that celebrates their individuality and their desire for freedom, not by using demeaning and racially charged language to scapegoat their 'differentness' as something for which they should be ashamed.

"Unfortunately, Rep. Stringer’s repeated failings in this regard have severely damaged his credibility to solve these problems. I personally feel he should step aside and make room for someone who can more effectively advance solutions which serve all Arizonans."

The Yavapai County Democratic Party stated in a news release the audio recordings of Stringer "show not only that he believes only Caucasian people are representative of true Americans, but that black people are not equal to people with light skin."

Stringer’s direct remarks included that saying that, “African-Americans and other racial groups…don’t blend in,” and that non-native English-speaking students are a “burden,” according to the news release.

"There is no place for institutional racism in Prescott, Yavapai County and in the state of Arizona. Our board voted unanimously on a resolution to ask Rep. Stringer to resign from his seat. He has no business in a position of authority in which he is capable of making policy that negatively impacts children and adults of different backgrounds, races, creeds and colors," the Democrats stated.

“David Stringer has demonstrated once and for all that he believes that black people are not equal Americans through his odious comments to impressionable ASU students,” said Toni Denis, chair of the Yavapai County Democratic Party. “We are adamant that he resign, and if he does not, we will do all in our power to work toward his removal from office.”