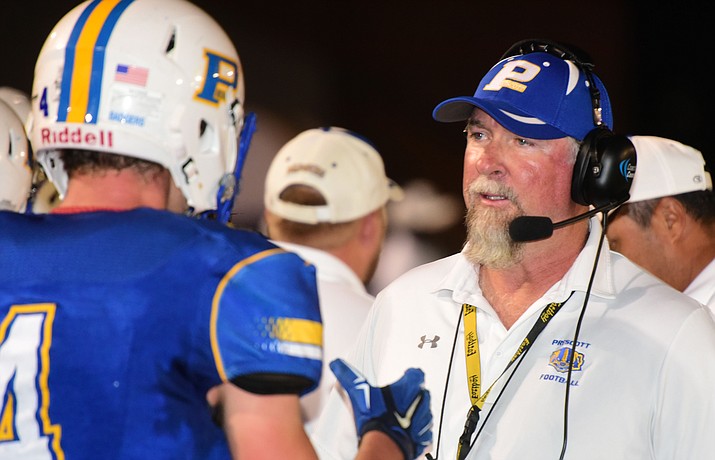 Prescott head coach Michael Gilpin talks to Aaron Greene on the sidelines as the Badgers play Moon Valley on Sept. 15, 2017, in Prescott. Gilpin is currently on leave from the football program while the athletic department conducts an investigation into an incident that happened at practice Wednesday, Aug. 29. (Les Stukenberg/Courier, file)

PRESCOTT — In a statement issued by Michael Gilpin via email early Friday morning, the Prescott football head coach defended himself after being put on leave Thursday pending an investigation by the athletic department.

“I am so absolutely devastated at what is happening to our football program. Even as I watch my own reputation evaporate, I still can’t help primarily thinking about the affect these adult politics are having on our boys,” Gilpin said in the statement. “We teach them, lecture them, implore them to act with honor and dignity, then we do the exact opposite.”

Townsend initially sent an email late Thursday night stating Gilpin was put on leave until an investigation by the athletic department looked into the incident that took place Wednesday between the assistant coach and a player after practice. It did not, however, give details about the incident.

Gilpin said he was not directly involved with the altercation while it took place between the assistant coach and player shortly after practice while the team was walking back to the locker room.

“I heard voices elevate, I literally ran over and diffused the situation,” Gilpin said in the statement, adding later in a phone interview Friday afternoon that there was no physical contact between the two.

“I put my arm around the coach and walked him off, and told the player to walk away,” said Gilpin during the phone interview while explaining he was just trying to calm things down in effort to figure out what was going on.

Gilpin said the player later expressed remorse, and wanted to apologize to the team, Gilpin and the assistant coach. Before that could happen Thursday, Gilpin was put on leave.

When asked about the situation and the status of the investigation, if there was more to the story or if other factors were involved, Gologoski said in a phone conference interview with Townsend and the Courier that the school and the district could not comment in order to protect all parties involved, and that details would be provided at the conclusion of the investigation.

The investigation is expected to wrap up as early as Tuesday, Sept. 4, Townsend said.

While Gilpin is on leave, assistant coach Cody Collett will take the helm of the Badgers as they travel to Phoenix and play Moon Valley on Friday night.

Collett spent four seasons as head coach of the Badgers from 2012-2016, going 27-14. He returned to the Prescott sidelines in 2017 as a tight ends coach under Gilpin.