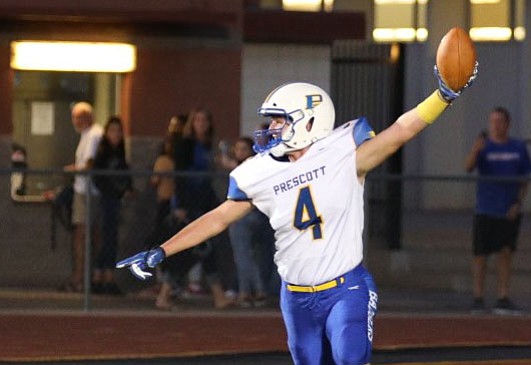 Defensive end Aaron Greene (4) celebrates a touchdown after blocking a punt and scoring against Moon Valley in the first quarter Friday, Aug. 31, 2018, in Phoenix. (Jim Clark/Courtesy)

“I think our tempo wore them (Moon Valley) down a bit,” Collett said in a phone interview late Friday night.

AROUND THE GRAND CANYON

Greene was credited with both blocked punts, Collett said.

“Aaron was extremely impressive tonight. He’s so long, and he had good technique. He took the ball right off the foot,” Collett said. “Any time you start the game with two punt blocks, that’s a huge momentum swing.”

In the second quarter, Sam Giordan’s 37-yard run set up Clark’s first touchdown run of the night on a 5-yard scamper, making it 20-0, then scored on a quarterback sneak with 1:27 left in the first half to give Prescott a 27-0 lead at halftime.

After a Bryce Peters field goal to make it 30-0, Clark would score his third touchdown of the night on a 19-yard run to seal the deal with 11:52 left in the game.

Moon Valley (0-2, 0-0 Skyline) has failed to score in eight-straight quarters to begin the season. The Rockets were shut out in Week 2 by Desert Edge, 26-0.

The Badgers (1-1, 0-0 Grand Canyon) lost 40-17 in Week 1 against that same Desert Edge squad, then were forced to reschedule with Canyon del Oro a week ago after lightning forced officials to postpone the game.

Prescott returns home to host Deer Valley on Friday, Sept. 7. The Skyhawks (0-2, 0-0 West Valley) lost 49-35 to Thunderbird on Friday night after opening the season Week 2 with a 40-21 loss to Arcadia.

Kickoff Friday night against Deer Valley is set for 7 p.m.