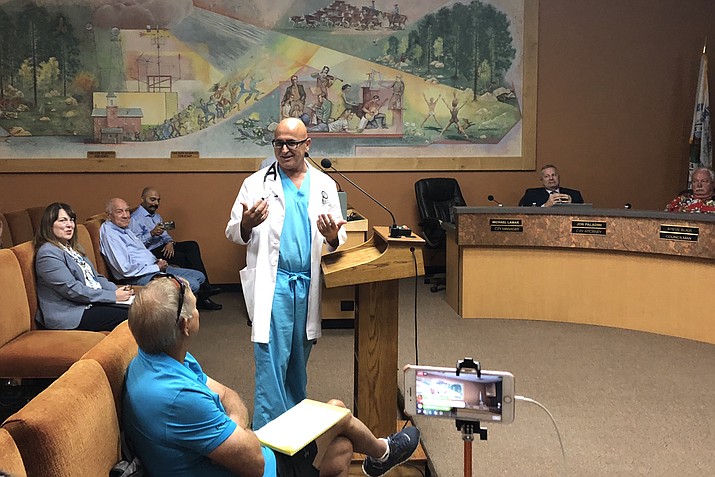 Dr. Hojat Askari explains his plans for the Whispering Rock subdivision to the Prescott City Council prior to a public hearing on Aug. 28. Askari is asking the city to annex about 74 acres of land along Willow Creek Road, north of Heritage Park, to allow for the new subdivision, which would include medical offices, retail stores, and restaurants. (Cindy Barks/Courier)

Businesses, not homes, will be the focus of a subdivision planned along Willow Creek Road in northeast Prescott — a point that generated community support for a proposed annexation this week.

A 74-acre annexation proposal by local doctor Hojat Askari got its first public review on Tuesday, Aug. 28, when the Prescott City Council conducted a public hearing. Askari’s Whispering Rock subdivision is being planned on the east side of Willow Creek Road, north of Heritage Park.

Although the council made no decisions about the project this week, comments on the proposed annexation were largely positive.

Former City Councilman Charlie Arnold was the only member of the public to speak during the hearing, and he voiced strong support for the annexation.

While noting that questions would likely arise in the community during the coming weeks of review, Arnold reminded the council about the business benefits of the Whispering Rock project.

“This is the first time in a while we get to talk about an annexation that isn’t rooftops,” Arnold said, referring to previous and ongoing annexation proposals that involve mostly new homes. “This is jobs; this is medical; this is retail. These are things we need in north Prescott. This is something that will be great for Prescott.”

Several of the council members also voiced support for the plans.

Councilman Phil Goode agreed, and added that the businesses planned by Askari are “desperately needed” in the area.

Planning Manager George Worley explained that the Aug. 28 public hearing was the first step in the state-required process for annexations. At future meetings, he said, the council would consider other aspects, such as a rezoning and a subdivision plat.

Also among the details is a proposal by Askari to deed about 20 acres of open land to the city. The open space would take in much of the scenic Granite Dells area on the eastern side of the parcel, Worley said.

Askari told the council that he hopes the city will build a trail on the Granite Dells land that will connect the Willow Lake area with the Constellation trails and Phippen Museum along Highway 89.

Central to Askari’s plans will be a medical complex that he said would allow local residents to stay in town for a variety of medical procedures.

“For the past 10 years, I have seen so many 80-years-old-plus people have to go to Phoenix for hip replacements, knee replacements,” Askari said. “My vision is to expand our medical community to bring the best doctors, and have all the medical doctors we need — so no one will have to drive out of here to do their medical needs.”

He added that the project also would bring needed restaurants and hotels to the growing area, which includes Embry-Riddle Aeronautical University.

Mayor Pro Tem Billie Orr read a letter of support from Embry-Riddle Chancellor Frank Ayers, who wrote that Askari’s subdivision “will benefit the campus and community in many ways,” including providing employment opportunities for students.

Worley said the property proposed for the annexation is currently zoned for residential. Among the coming decisions would be a rezoning to allow for the business uses.

The plans also include a new traffic signal at Haas Drive, which Worley said would provide a second signalized entrance for Embry-Riddle. He added that plans involve having Askari share in the cost for related infrastructure improvements, including the traffic signal. The specifics of the cost-sharing have yet to be determined, Worley said.