(NEW) KIN - Armed with a mysterious weapon, an ex-con and his adopted teenage brother go on 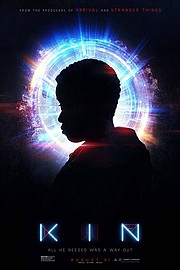 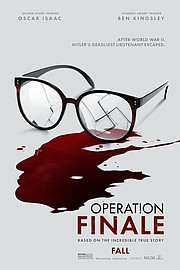 THE HAPPYTIME MURDERS - Detective Phil Philips is a down-on-his-luck puppet who used to work for the Los Angeles Police Department. When two puppets from an old TV show wind up dead, Phil suspects something is afoot and rejoins the LAPD as a consultant. Reunited with Connie Edwards, his former human partner, the bickering duo soon find themselves in a race against time to protect other former cast members before the killer strikes again. Stars Melissa McCarthy, Maya Rudolph, Joel McHale, Elizabeth Banks, Bill Barretta. Rated R – mystery, crime

ALPHA - Young Keda tries to survive alone in the wilderness after he's left for dead during his first hunt with his Cro-Magnon tribe. He soon forms an unlikely alliance with a lone wolf that was abandoned by its pack. Facing overwhelming odds and nonstop danger, Keda and the wolf must now trek through a harsh and unforgiving landscape to make it home before winter. Stars Kodi Smit-McPhee, Leonor Varela, and Jens Hulten. Rated PG-13 – drama, mystery

MILE 22 - CIA operative James Silva leads a small but lethal paramilitary team on an urgent and dangerous mission. They must transport a foreign intelligence asset from an American embassy in Southeast Asia to an airfield for extraction -- a distance of 22 miles. Silva and the soldiers soon find themselves in a race against time as the city's military, police and street gangs close in to reclaim the asset. Stars Mark Wahlberg, Ronda Rousey, and Iko Uwais. Rated R – action, adventure

PAPILLION - The epic story of Henri "Papillon" Charrière, a safecracker from the Parisian underworld who is framed for murder and condemned to life 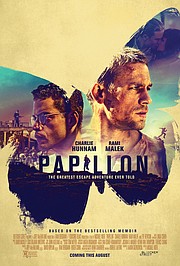 A-X-L - A.X.L. is a top-secret, robotic dog that has advanced artificial intelligence created by the military. After an experiment gone wrong, A.X.L. is discovered hiding in the desert by Alex, a kindhearted outsider who finds a way to connect with the robot. The two soon develop a special friendship based on trust, loyalty and compassion. Helping Miles gain confidence, A.X.L. goes to any length to protect his new companion, including facing off against the scientists who want their creation back. Starring Alex Neustaedter, Becky G, Alex MacNicoll, Dominic Rains, Thomas Jane. Rated PG – science fiction, action

THE MEG – A massive creature attacks a deep-sea submersible, leaving it disabled and trapping the crew at the bottom of the Pacific Ocean. With time running out, rescue diver Jonas Taylor must save the crew and the ocean itself from an unimaginable threat -- a 75-foot-long prehistoric shark known as the Megalodon. Stars Jason Statham, Ruby Rose, Li Bingbing, and Rainn Wilson. Rated PG-13 – fantasy, science fiction 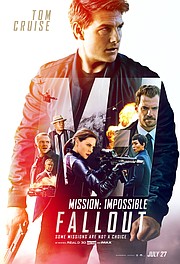 the Apostles plan to use three plutonium cores for a simultaneous nuclear attack on the Vatican, Jerusalem and Mecca, Saudi Arabia. When the weapons go missing, Ethan and his crew find themselves in a desperate race against time to prevent them from falling into the wrong hands. Stars Tom Cruise, Henry Cavill and Ving Rhames. Rated PG-13 – action, adventure

SLENDER MAN – Terror strikes when four teenage girls in a small town perform a ritual to debunk the lore of a tall, thin, horrifying figure known as the Slender Man. They soon fear that the legend is true when one of them suddenly goes missing. Stars Joey King, Javier Botet, Annalise Basso, and Jaz Sinclair. Rated PG-13 – horror, supernatural

MAMMA MIA! HERE WE GO AGAIN – Sophie finds out more about her mother's past while seeking guidance on how to handle her pregnancy. Stars Meryl Streep, Amanda Seyfried, and Pierce Brosnan. Rated PG-13 – musical, comedy

BLACKkKLANSMAN – From visionary filmmaker Spike Lee comes the incredible true story of an American hero. It’s the early 1970s, and Ron Stallworth (John David Washington) is the first African-American detective to serve in the Colorado Springs Police Department. Determined to make a name for himself, Stallworth bravely sets out on a dangerous mission: infiltrate and expose the Ku Klux Klan. The young detective soon recruits a more seasoned colleague, Flip Zimmerman (Adam Driver), into the undercover investigation of a lifetime. Together, they team up to take down the extremist hate group as the organization aims to sanitize its violent rhetoric to appeal to the mainstream. Produced by the team behind the Academy-Award winning Get Out. Stars Washington, Driver, Laura Harrier, and Jasper Paakkonen. Rated R – drama, crime

JURASSIC WORLD: FALLEN KINGDOM – Three years after the destruction of the Jurassic World theme park, Owen Grady and Claire Dearing return to the island of Isla Nublar to save the remaining dinosaurs from a volcano that's about to erupt. They soon encounter terrifying new breeds of gigantic dinosaurs, while uncovering a conspiracy that threatens the entire planet. Stars Bryce Dallas Howard, Chris Pratt, and Jeff Goldblum. Rated PG-13 – science fiction, action

SOLO: A STAR WARS STORY - Young Han Solo finds adventure when he joins a gang of galactic smugglers, including a 196-year-old Wookie named Chewbacca. Indebted to the gangster Dryden Vos, the crew devises a daring plan to travel to the mining planet Kessel to steal a batch of valuable coaxium. In need of a fast ship, 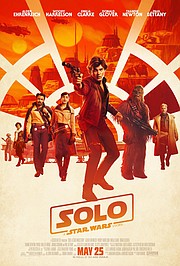