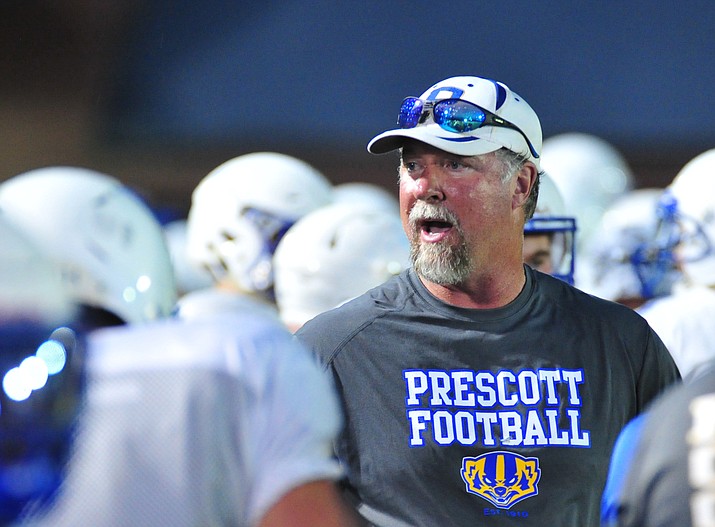 Prescott head football coach Michael Gilpin talks with players on the sideline during a scrimmage Aug. 8, 2018. Gilpin has been put on leave and will not coach the Badgers at Moon Valley on Friday, Aug. 31, 2018, in Phoenix. Assistant coach Cody Collett will coach the team. (Les Stukenberg/Courier)

PRESCOTT — Prescott football head coach Michael Gilpin has been put on leave and will not coach the Badgers during Friday night’s road game at Moon Valley, the school announced via an email statement late Thursday night.

Assistant coach Cody Collett will coach the team until the Prescott athletic department completes an investigation into an incident that took place at practice Wednesday afternoon between an assistant coach and a player.

The name of the assistant coach, or the player, were not released by the athletic department Thursday night.

“In an effort to communicate clearly and avoid any misunderstanding, we need to let you know that coach Cody Collett will be filling in as the head coach for the varsity football team,” the statement read, which was sent via email to parents. “An unfortunate event took place after practice (Wednesday) between an assistant coach and player, so we are taking the time to assure that we are properly addressing concerns.”

Prescott Athletic Director Missy Townsend went on to say in the statement: “We value coach Gilpin, his coaching staff, and our players, so we want to assure we are responding in a manner that is consistent with our protocols that are in place when these types of events occur.”

Gilpin did not coach the team Thursday afternoon at practice.

In a phone interview with her late Thursday night, Townsend said she expects the investigation into the matter to be complete by Tuesday, Sept. 4.

Townsend would not comment on the nature of the incident or details about what took place at Prescott football practice on campus Wednesday, or if she expects Gilpin to be reinstated as head football coach of the Badgers.

“That decision has not been made,” she said.

No further details of the incident, or the investigation were released as of Thursday night.

Gilpin is 13-8 overall as head coach of the Badgers in two-plus seasons. Prescott (0-1, 0-0 Grand Canyon) is scheduled to play Moon Valley in Phoenix on Friday night. Kickoff is set for 7 p.m.