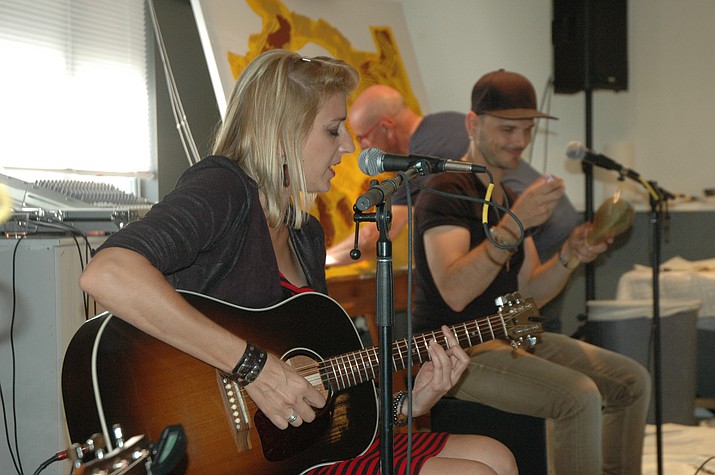 Buswel, who is well-known internationally, said it was awesome to be able to perform in such an intimate venue. It’s her second time in Prescott, but her first at the gallery, she said.

“I’m very happy to meet all these people and it’s pretty cool. I’m very excited to be here,” Buswel said, also mentioning how much she couldn’t wait for the big Voila Concert she is set to headline Friday, Aug. 31. “I don’t have any words for that because it’s like a dream for us to be here and to play in this beautiful theater.”

Through the interpretation of Martine Houzé, Cairoli said the painting he created while Buswel was singing was not only inspired by the music, but all he’s learned about Arizona’s landscape.

When painting, Cairoli said he forgets about everything around him and is alone in a bubble, even though the event’s attendees were watching him paint.

“The world doesn’t exist anymore,” he said through Houzé.

One of the people at the event, Heidi Swanson, said she was told about it through word of mouth. She was having a great time seeing all the different mediums and types of art, Swanson said.

“The French Connection” is the first international art show in Arizona with an American artist and French artist, said Donna Carver, Voila Tour media representative and the American artist whose work is on display alongside Cairoli’s.

There are numerous other events taking place over the course of the week for the Voila Tour, including the Voila Concert at the Elks Theatre and Performing Arts Center, 117 E. Gurley St., Friday, Aug. 31, at 7 p.m.

Tickets are still available at $25 for adults and $23 for seniors online at www.prescottelkstheater.com, by calling 928-777-1370 or at the door one hour prior to the performance.

For a full list of events and more information about the Voila Tour, visit www.voilatouraz.com.