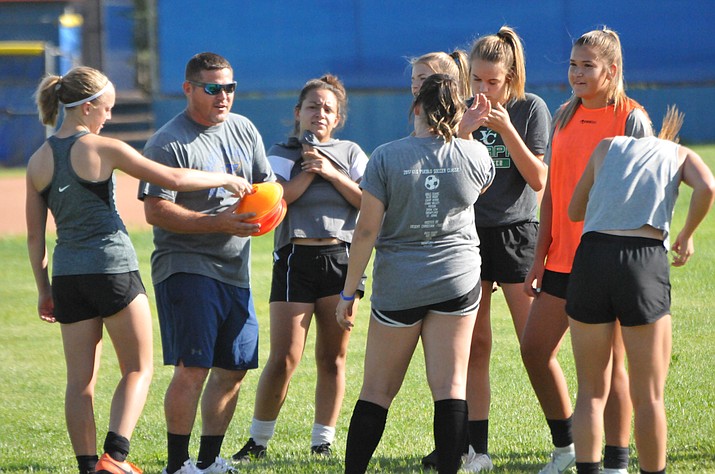 CHINO VALLEY — Although the 2017 season came to a frustrating close for the Chino Valley girls’ soccer team, which lost to 2A Central region rival Northland Prep in the state championship match last October, spirits remain high this fall.

Cougars coach Allen Foster said he returns an experienced roster, one led by his daughter, senior distributing midfielder Lauren Foster, and junior goalkeeper Kacey Matthews, each of whom played key roles for the state runner-up squad.

“Lauren’s got so much talent,” said coach Foster, whose daughter registered a team-best 23 goals and 10 assists for the 2017 Cougars, who finished with a 15-5-1 overall record and a 6-2 mark in region.

Chino Valley kicked off the 2018 campaign on Tuesday, Aug. 28, with a resounding 11-1 victory over Round Valley at home. The Cougars defeated the Elks, 3-1, in the state semifinals last year.

Central region play begins Sept. 11 versus county rival Camp Verde at home. A much anticipated rematch against Northland Prep is scheduled for Sept. 27 in Flagstaff.

“There is not a clear-cut favorite in the region,” coach Foster said.

Freshman Sabrina Lopez, an outside wing, has a “cannon” for a leg, coach Foster said. She had a goal and an assist on Tuesday. In the center of the field, Lauren controls the tempo along with junior holding midfielder Ashley McGuffey.

“Our offense is lethal,” said coach Foster, who mentors a traveling Club soccer team for his players over the summer. “We’re fast, and our touch [on the ball] is better [than last season]. We expect to score early and often.”

Lauren Foster, Reed and McGuffey are co-captains for the Cougars. In the offseason, coach Foster said his girls hit the weight room four days a week and showed their commitment to improving.

“We have to want it,” Matthews said. “We’re better than what we’ve been, and we have three solid freshmen. We’re looking really good. Our communication and our shots are getting better. We attack the field.”

In 2016, Chino Valley won the 2A state championship. Lauren said she and her teammates seem more motivated to capture another title because there’s a target to attack and that might help them “take off.”

“We’re a scrappier team,” she added.

Last October, in the state final, Northland Prep won 3-1, getting the better of the Cougars with their superb passing skills. Lauren said Chino Valley needs to improve its first touch on the ball, but that the Cougars are “the hardest working team,” and are ready to bounce back.

Over the offseason, the Cougars graduated only two seniors. The rest of the team came back.

“We play really well together,” Lauren added. “From front to back, we’re extremely fast. We’ve got the same group of girls – a solid 16 girls.”