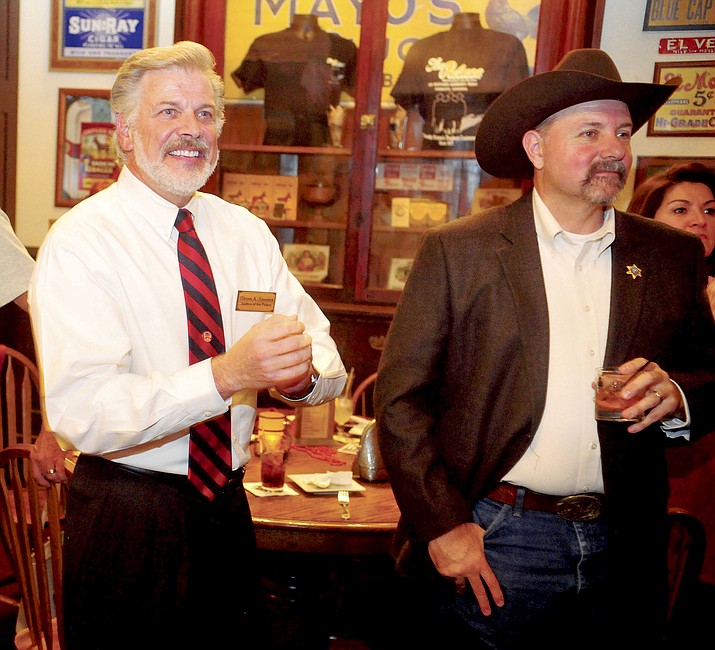 New Prescott Justice of the Peace Glenn Savona and Constable Ron Williams watch as results from the Primary Election come in Tuesday, Aug. 28, 2018, at the Palace Restaurant and Saloon in downtown Prescott. Check out the Thursday edition of the Courier for the story about the Justice of the Peace and Constable contests in Prescott and Seligman. (Les Stukenberg/Courier)

In a close election with a mere 69 votes separating the two candidates for the Prescott Valley mayor’s seat, unofficial results show Kell Palguta has received 50.57 percent of the votes ahead of Michael Whiting, who received 49.29 percent.

“It’s very close. We knew it was going to be close,” Whiting said from Gabby’s Grill in Prescott Valley where many town council members, Mayor Harvey Skoog, and supporters joined him.

Palguta, who did not make an appearance at the Palace Bar in Prescott, the Republican headquarters where other candidates had gathered, also did not respond to phone calls Tuesday evening.

Yavapai County elections staff collected ballots from 13 drop boxes at the close of the polls, 7 p .m. Tuesday. Those ballots will be counted Wednesday, said Leslie Hoffman, Yavapai County Recorder. In tight races, this may affect the outcome after these ballots have been tallied.

Whiting remains positive. “I hope for a good outcome for me tomorrow after all the votes are counted,” he said. “May the best man win.”

The mayoral race in Dewey-Humboldt also was close, with incumbent Terry Nolan receiving 53 percent and challenger Victoria Wendt receiving 46 percent. The difference between the two is 50 votes out of a total of 736.

“I am ecstatic. I really appreciate the community and their support,” Nolan said from his home. “Evidently, I’m doing what’s right, and I hope what I intend to do is right for this community. Anything is possible. I could have lost and we would have a new mayor.”

Nolan said he thought the race would be close. Wendt, who ran for council previously, said she remembered going to bed thinking she had won a seat on the council at that time, and woke up with her opponent a hundred votes or so ahead.

With this race, she said, “We ran it the best way we could. We ran it as clean as possible and that’s all we can do.” She acknowledged that she was disappointed as she has been unhappy with the town’s leadership. She said she and others will “just deal with it.”

“There’s always disappointment in our lives and we have to keep trudging along. I gave 150 percent of my effort to get something done,” she added, and promised, “You will see me around.”

Brooks said this was definitely a time where voters had to choose a direction they wanted their town to go.

“I want to thank the constituents and voters for supporting me; it spoke loudly to what I was saying,” she said, adding that she wants to revamp town codes to be less restrictive.

McBrady was hesitant to provide a comment with the unofficial count. “Things could change, you never know,” he said, adding that he was pleased with residents’ participation in the election, and said the coming year would be an interesting one.

Treadway has served a “rewarding” four years on the council and said whatever happens in this race is a “win-win situation.” He said he felt all the candidates would do a good job and had the best interest of the town at heart.

“I feel energized and I’m looking forward to accomplishing good things in the community,” Treadway said, and added that he is confident he can work well with the mayor and the new council.