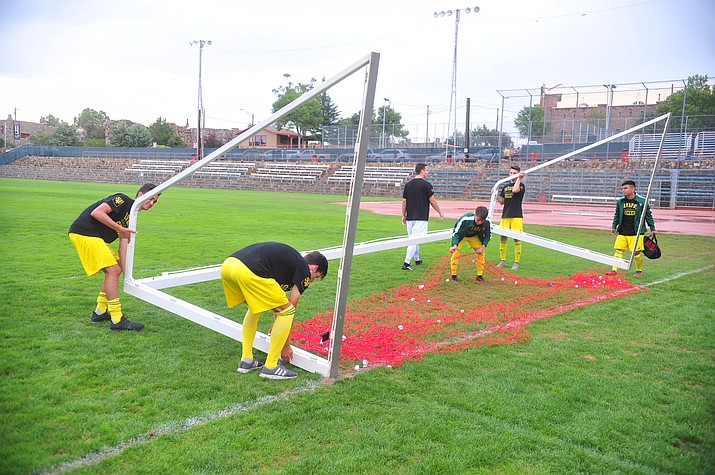 Yavapai College soccer players remove the goals from Ken Lindley Field in Prescott after learning that their match against Irvine Valley College of California was cancelled due to rain and lightning on Saturday, Aug. 25. (Les Stukenberg/Courier)

The NJCAA game was supposed to be part of Yavapai College’s 50th anniversary celebration, which took place all day and into the evening on Saturday.

Yavapai, which is in its 30th season as an intercollegiate program, was scheduled to play its season opener Aug. 23 at ACCAC rival Phoenix College. But through 56 minutes of regulation, and with the match tied at 1-1, lightning and rain forced its postponement.

Yavapai College Athletic Director Brad Clifford said that the Phoenix College match will be replayed in its entirety on a date yet to be determined. He added that no make-up date was set for the Irvine Valley contest.

The Roughriders are coming off of a semifinals appearance in the 2017 NJCAA Division I National Tournament last November in Prescott Valley. They finished the 2017 season with a 23-3-3 overall record and they are currently ranked No. 2 in the NJCAA’s D-I preseason poll.

The Roughriders are scheduled to begin ACCAC action at 1 p.m. Tuesday, Aug. 28, when they visit Shadow Mountain Community College in Phoenix.

Irvine Valley will travel to Rio Hondo College in Southern California on Aug. 28.