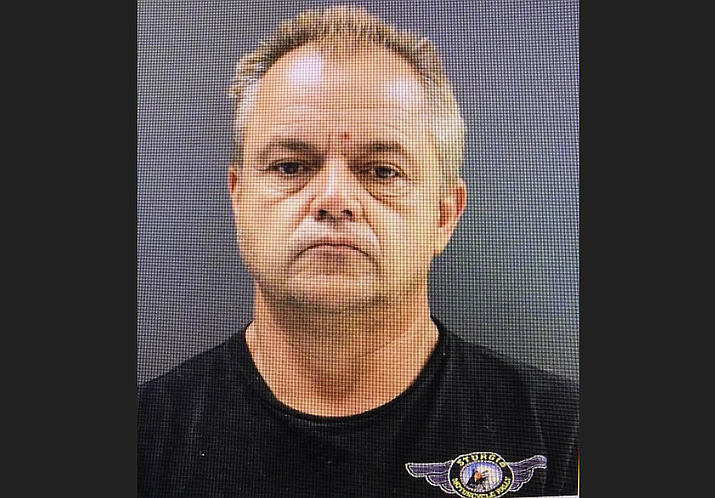 Randy Lee Crossno, 54, is wanted on felony warrants for drug offenses, aggravated assault and felony flight to avoid arrest. He was last seen by law enforcement Wednesday afternoon, Aug. 22, in the Government Canyon area of Prescott.

The Yavapai County Sheriff’s Office (YCSO) is searching for a warrant suspect who was spotted Wednesday afternoon, Aug. 22, in the Government Canyon area of Prescott, but managed to escape on foot after driving his vehicle into a detective’s vehicle.

The suspect, Randy Lee Crossno, 54, is wanted on felony warrants for drug offenses. He is a 5-foot-9 white male weighing about 200 pounds with brown eyes and brown hair. He was last seen wearing a black shirt and blue jeans, said YCSO spokesperson Scott Reed.

Detectives from Partners Against Narcotics Trafficking (P.A.N.T.) were attempting to serve an arrest warrant on Crossno at about 2 p.m. in the area when he spotted them from his car.

“There was a very brief chase, but the suspect did sideswipe the detective’s car and then fled on foot,” Reed said.

No officers were injured in the incident.

Despite an extensive search of the area by YCSO and other local law enforcement, the suspect could not be found. Crossno is now facing additional warrants for aggravated assault and felony flight to avoid arrest.

Roads in the area of Government Canyon were closed for several hours as investigators were working the scene, Reed said.

Anyone with information about this case or the possible whereabouts of Crossno is asked to contact Yavapai County Sheriff’s Office Criminal Investigations at 928-771-3260, or Yavapai Silent Witness at 1-800-932-3232.

If aware of the immediate whereabouts of Crossno, citizens are asked to call 911. He should be considered armed and dangerous, Reed said.