Moore: The birds, like summer are slowly slipping away 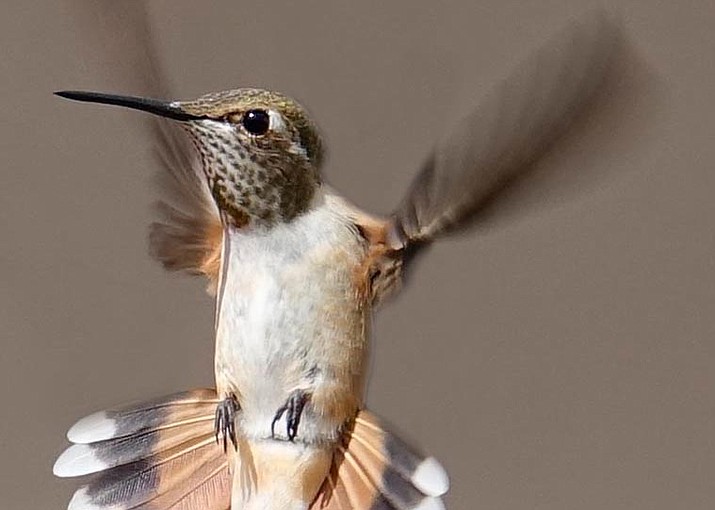 Rufous hummingbirds are a common visitor to hummingbird feeders during the month of August. (Heidi Dahms Foster/Courtesy)

My column on hummingbirds last week resulted in a lot of feedback from readers. One individual wrote, “My wife currently has up 20 feeders in the backyard and is going through over five gallons of nectar a day. Mostly Allen’s, Costa’s, black-chinned, broad-tailed, Anna’s and a few rufous. As busy as Ramsey Canyon out there.” Another reader wrote, “My friend lives in Pinon Oaks and she has so many hummingbirds that they are like bees swarming the feeders.”

And yet another reader wrote, “Last year when I put up a hummingbird swing, I was delighted to have it frequently used by Anna’s singers. They perch and preen, contorting themselves into amusing shapes, scratching and grooming for long periods. They often perch and sing for several minutes at a time, punctuating their songs with trills and tweets. The swing works best hanging from the edge of the eaves, about three feet from a feeder.”

Few bird species bring as much pleasure and enjoyment as do hummingbirds. It is sad to think their numbers will soon begin to dwindle as we transition from summer to fall.

With the abundant rains we have been experiencing, it is challenging to maintain the feeders. The nectar solution gets diluted by rain water, debris from the trees under which they are hanging gets washed into the feeders, and ants are particularly adept at finding feeders and getting into the sugar water.

It is important to be vigilant in maintaining nectar feeders. The sugar solution can grow mold, bacteria and algae, so a regular cleaning is highly recommended. A good rule of thumb is to ask yourself if you would drink out of the feeder. If the answer is no, then you need to clean the feeder and replace the sugar water.

While it is only August, fall migration is already underway for many songbird species. Orioles are pretty much gone already, and other bird species are on the move. Earlier this week I had a MacGillivray’s warbler in my yard—a classic example of a migratory song bird moving south. Last week, a male Lawrence’s goldfinch was seen on a nyjer feeder in the Prescott area. This is a really uncommon species in the Central Highlands which highlights the fact that birds are on the move.

However, to catch some of this action, you need to get out into your yard and look for birds away from your seed feeders. Interestingly, many migratory birds are insect eaters—which is why they migrate. They can’t stay in the northern latitudes of North America in winter, because once freezing temperatures set in their food source is gone. Migrating insect eaters will not show up at seed feeders; they will be gleaning for insects in the foliage in your yard.

During the month of August, many of the birds migrating through this area are the same species that passed through in the spring while they were heading north. For example, it is not unusual this time of year to see lazuli buntings at the feeders as they pass through on their way south.

A behavior contributing to new birds showing up is post-breeding dispersal. When breeding birds have an active nest site, they don’t stray far from their territory. However, when they become empty-nesters, there is nothing that binds them to that specific location.

Freed of any parental responsibilities, adults disperse from their summer habitat and wander. An example of this behavior is the blue grosbeak. In late summer it seems I run across blue grosbeaks in almost every habitat—chaparral, pinyon-juniper, riparian and residential settings.

Be on the lookout for ‘new’ birds and until next week, Happy Birding!