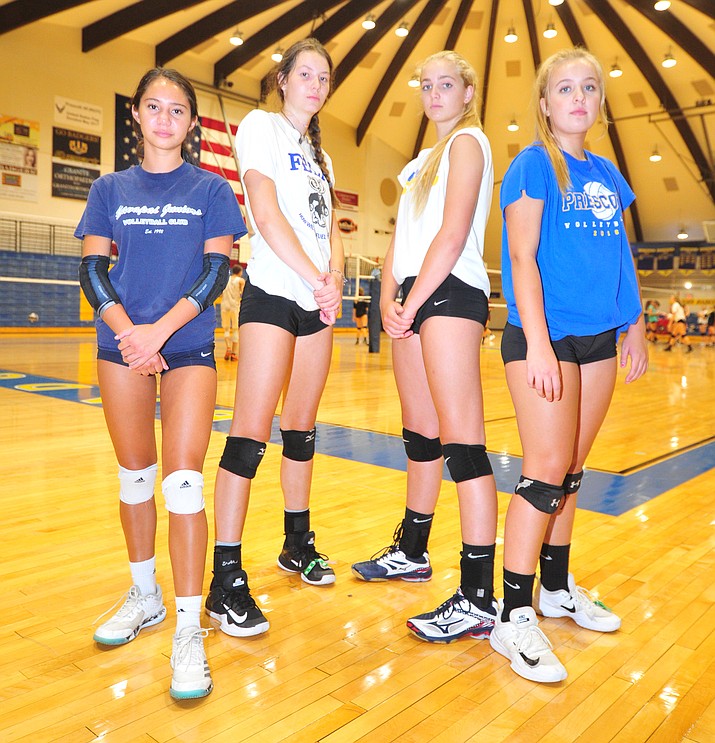 Prescott’s Sabina Dimaano-Simmons, Dani Dreher, Kate Radovich and Tessa Rothfuss, who are expected to make an impact this season, pose for a picture at practice Friday, Aug. 17, 2018. (Les Stukenberg/Courier)

PRESCOTT — In recent years, the Prescott volleyball program has been one of the most competitive in the 4A ranks, consistently qualifying for the state tournament and, on occasion, advancing deep into the bracket.

In 2017, though, the Badgers finished under .500 with a 10-15 overall record, which was a clear aberration. Third-year coach Josiah Ramirez, whose 2016 team qualified for state, may be in the midst of a rebuilding period.

Only six players on the current 14-player roster return from last fall, although four of them started. Ramirez has four seniors, four juniors and six sophomores.

“We’re definitely going to need to push through a lot of things,” senior setter Tessa Rothfuss said from practice in mid-August at the dome gym on campus. “The main thing we need to work on is being more offensive, because defense we’re pretty good. Offensively, we’re not that tall [no player is taller than 5-foot-11], so we’re going to need to work on scoring points.”

Prescott begins the 2018 season with its home opener versus Youngker at 6 p.m. Tuesday, Aug. 28.

“We have a lot of work to do,” Ramirez said candidly. “We are very young, so these girls are doing the best that they can to be aggressive. But, also, their mentality is not there yet.

“So, just making smart choices is what it boils down to. And that comes from experience and playing, and going against other teams. That’s the longest part of the process that these girls are not very patient about. They want to see the results.”

“A couple of years ago we were really strong, and this year we can be just as strong,” Dreher said. “We just have a lot of new girls, and none of us have played together before. So, we just need to work really hard on offense and focus on just bonding and learning more about each other so we can have some chemistry.”

Ramirez said that his defense and passing are “on point,” which should make the setters’ jobs much easier. He wants his current team to work toward being what the 2016 squad was – being aggressive while making good decisions and putting points on the board.

“I’m excited to work with this young group, and to see how a lot of our tall, athletic kids that are young are going to pan out in the next couple years,” the coach added. “I’m ready to take whatever they give me.”