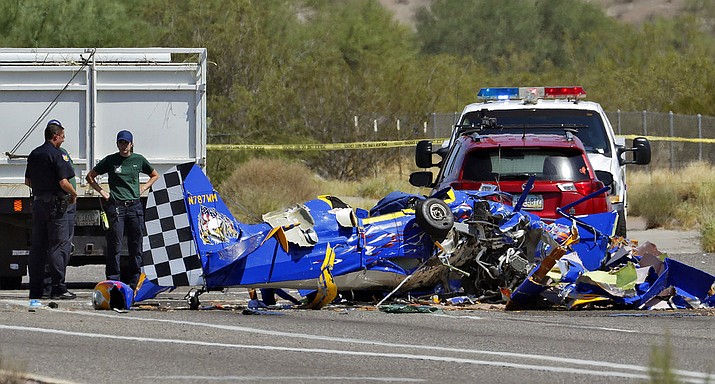 The wreckage of a small plane sits in an intersection on Monday, Aug. 20, 2018, in Phoenix. The plane went down near the city's Deer Valley Airport. (AP Photo/Matt York)

The wreckage of a small plane sits in an intersection Monday, Aug. 20, 2018, in Phoenix. The plane went down near the city's Deer Valley Airport. (AP Photo/Matt York)

PHOENIX — A homemade plane crashed in a Phoenix intersection Monday, killing the pilot and the sole passenger, authorities said.

The plane went down near the city's small Deer Valley Airport and the pilot, Theodore Rich, 54, was pronounced dead at the scene, Phoenix police Sgt. Mercedes Fortune said.

The passenger, identified as Elaine Carpenter, 49, was transported to a trauma center in critical condition, fire officials said. But she later died.

Police did not say how the two were related. The investigation remains ongoing.

Phoenix Fire Department officials said the small aircraft collided with a car as it crashed in a major intersection. The driver of that car initially refused hospitalization but later sought treatment for head pain, Phoenix Fire Capt. Kenny Overton, said. He did not know if that person was still hospitalized or was already released.

Images showed wreckage of the plane in the middle of traffic lanes with firefighters at the scene.

Both the FAA and the National Transportation Safety Board will investigate.

It is the second fatal crash involving a home-built plane in Arizona in three days. Crews recovered the bodies of two men Sunday in rugged terrain in Camp Verde, 90 miles (144 kilometers) north of Phoenix.

Sheriff's officials had found the wreckage of an experimental "Air Camper" model plane a day earlier. It was found by tracking a cellphone that belonged to one of the two men aboard.