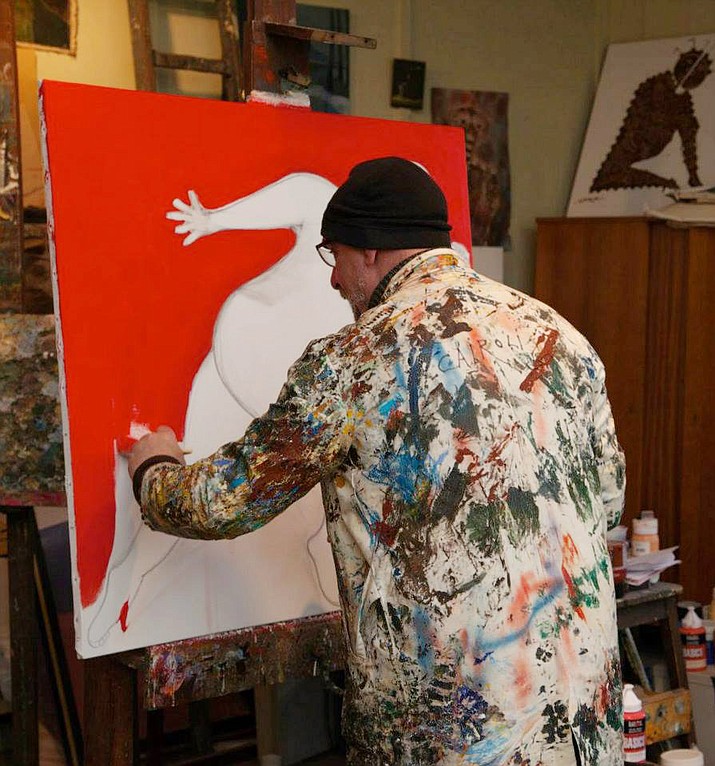 Yves Cairoli, a French artist whose works, along with those of Donna Carver, make up Mountain Artists Guild’s exhibit, “The French Connection.” (Donna Carver/Courtesy)

The French have returned. Or at least the Voila Tour is returning for a second year, presenting Prescott with another cultural exchange.

Or at least the Voila Tour is returning for a second year, presenting Prescott with another cultural exchange. This year, it begins during the Fourth Friday Art Walk Friday, Aug. 24, with the opening reception for “The French Connection,” a mixed exhibition of paintings by local artist Donna Carver and French artist Yves Cairoli.

“It’s the first international exhibit that has ever happened in Arizona of the Voila Tour with an American artist and a French artist who will both be there at that opening to meet and greet with the public,” Carver said. “My works of art are going to reflect our deep relationship that we have with France and with our brothers and sisters of France.”

On almost all of the works, Carver will have a plaque speaking to that relationship, why she chose to create the work of art and what connection it has, she said. One example she gave was a monotype of an Iris, which grows prolifically in this are a as well as in France. During France’s monarchy, the king asked his artist to create an emblem and using the iris as an inspiration, they created the Fleur-de-lis.

Cairoli is from Douai in Northern France and speaks no English, she said. As such he’ll have someone who is fluent in the language and can translate.

An abstract painter who combines his years as a draftsman with his art, the works Cairoli has created for the show are a reflection of his experimental lens view he had when coming to America for the first time during the inaugural Voila Tour last year, Carver said.

“He was touched by all the places that he visually experienced, like the Grand Canyon, Willow Lake, Watson Lake, Lynx Lake, downtown Prescott,” she said. “That’s what inspired him to create what he did for the show.”

Cairoli will have 11 pieces shown in “The French Connection” show.

Alain Houzè, the mastermind behind the Voila Tour, said he is very proud of the exhibition because it speaks to what he’s always envisioned.

“It’s all about sharing our culture,” Houzè said. “The idea that Donna had, to do this mixed exhibition, is totally Voila Tour and what I want to do.”

The exhibition officially opens Tuesday, Aug. 28, with “The French Connection, Up Close and Personal,” where Cairoli will do a live painting alongside music by Gaelle Buswel, the musical star of the Voila Tour. There will also be wine from France, he said, and Carver noted the event will also include tapenades by a French chef and music from an international harmonica player named CadiJo. Further, Buswel has created specific music for Cairoli for the painting so it goes along with the mindset he has as he paints.

Buswel is a big name in music in Europe, Houzè said. She recently toured Japan and has opened for such artists as Ringo Starr and ZZ Top.

Tickets for “The French Connection, Up Close and Personal,” are $15 and can be purchased online at www.mountainartistsguild.org or by calling 928-445-2510. More than half have already been sold, Carver said.

These aren’t the only events making up the Voila Tour though; they’re only two of many events happening from Aug. 24 all the way to Saturday, Sept. 1, one of which is the main “Voila Concert” at the Elks theatre and Performing Arts Center Friday, Aug. 31, featuring Buswel, Belen “la Parisienne,” CadiJo, Chris & Lo, Cheyenne, Frankeur, Swan Vaude, Slim & Pat, with special guests Tom Agostino, The CheekTones and Sugar & the Mint. VIP Tickets, which involve a special dinner by French chef Lacroix, sold out within the first week, Houzè said. However there are general tickets left that are $25 for general admission and $23 for seniors – and those are available online at www.prescottelks.theater.com, by calling 928-777-1370 or at the door one hour prior to the performance.

• “Frankeur at Le Rafter,” a taste of Paris in PV