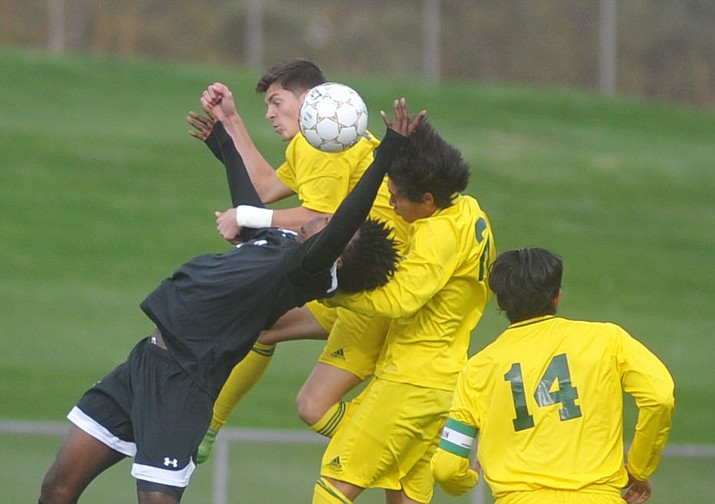 Yavapai College soccer player Andrew Rivera and Isaac Arellano battle for a ball as the Roughriders take on Tyler in the national tournament Nov. 17, 2017, in Prescott Valley. The Roughriders received a No. 2 national ranking in the 2018 NJCAA preseason poll. (Les Stukenberg/Courier, file)

PRESCOTT, Ariz. — PRESCOTT — The Yavapai College men’s soccer team will enter the 2018 season with the No. 2 ranking in the NJCAA after finishing the 2017 campaign as a national semifinalist.

The Roughriders will begin the 2018 season at ACCAC rival Phoenix College at 4:30 p.m. Thursday, Aug. 23. Their home opener is scheduled for 2 p.m. Saturday, Aug. 25, against Irvine Valley at Ken Lindley Field in Prescott.

Rounding out the Top 5 in the preseason poll are Monroe College at No. 3, ACCAC rival Pima at No. 4 and Eastern Florida State at No. 5. Arizona Western and Phoenix College both received votes in the poll.