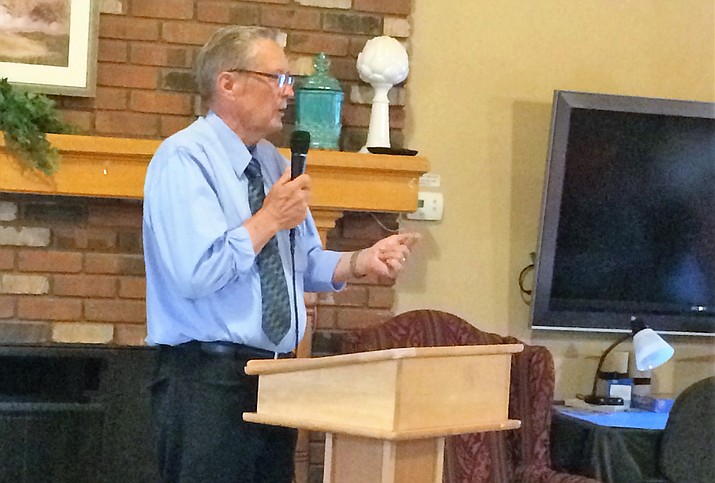 Prescott Valley Mayor Harvey Skoog visits with residents at Victorian Estates, one of several stops he made Tuesday, Aug. 7, for National Night Out. (Sue Tone/Tribune

Prescott Valley town, police and fire officials expect the applause and kudos from residents on National Night Out when they stop in at neighborhood parties. They also field questions about roads, crime, and flooding.

Victorian Estates hosted its 14th National Night Out Ice Cream Social Tuesday, Aug. 7. Nearly 40 residents of the gated community were delighted to see police vehicles pull into the parking lot of the Community Center only to see them turn around to leave on a call.

“Maybe we should pull the fire alarm,” someone suggested to Barbara Lucas, HOA vice president.

When Norm Davis, Prescott Valley Public Works director, walked in a few minutes later, he received rousing applause and a warm welcome. Residents questioned him closely about the recent storm that impacted several homes after the town completed work nearby on water and sewer system improvements.

It was one big monster storm, Davis said, the likes that haven’t been seen since 1983. He said drainage and stormwater runoff were no fault of the town’s recent work.

This year, 16 groups hosted National Night Out get-togethers, said Jason Risinger, spokesperson with PV Police Department. “This is what makes the town so special,” he said.

In the StoneRidge community, eight Block Watch areas with 27 captains keep an eye on about 1,100 homes covering all phases of the development, said Ira Bresof, captain of Phase 4.

Victorian Estates, a gated community off Highway 69 on the west end of town, however, discontinued its Block Watch groups. “There was no need for it,” Lucas said, adding that everyone regularly looks out for each other.

Mayor Harvey Skoog answered questions about the availability of water, and plans for the former Sam’s Club. “I have heard there’s some activity,” was all he would say about the vacant building.

When asked about an increase in traffic with 220 apartment units coming in on Florentine, Skoog pointed to Davis and several police officers.

“Talk to those guys,” he said with a laugh.

Officers carry Naloxone, an injection that stops the effects of an overdose. “When we get a call on an overdose, we get there first. That’s because our cars are faster than firetrucks,” Kaufman joked.

To decrease burglaries, he advised keeping vehicles and doors locked, and to look out for each other “because that’s what neighbors do.”

As for scams such as people coming to the door wanting to sell Bibles, he said, “Who wants to buy a Bible? You go to a church and they’ll give you one free.”

To another resident’s concern, Kaufman acknowledged the difficulty in enforcing traffic laws regarding vehicles turning left from Highway 69 onto Glassford Hill Road. Earlier that morning, he said he counted three vehicles making the turn after the light changed, but couldn’t do anything because he was 20 cars back.

Kaufman also explained that PVPD investigates collisions that happen at the intersections along Highway 69, and the Arizona Department of Transportation takes care of collisions occurring between intersections.

As town staff and police officers left the room, members of Central Arizona Fire and Medical Authority pulled up in a truck for another round of applause, ice cream, questions and answers.

Next year’s National Night Out event is Tuesday, Aug. 5.