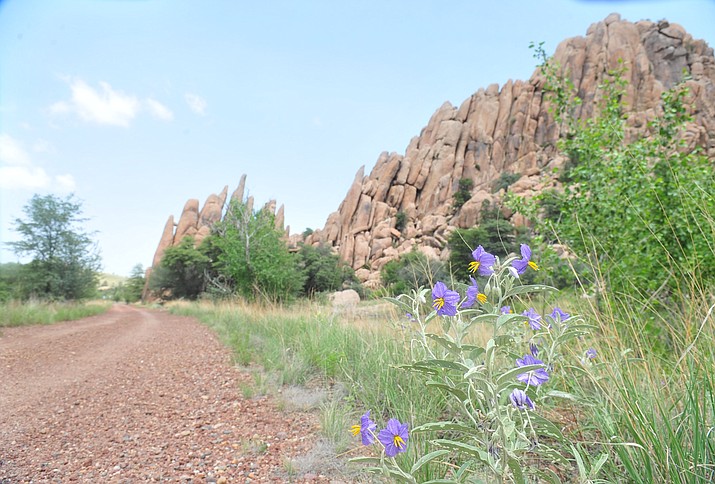 Looking at the Points of Rocks, pre-development, along the Peavine Trail, Prescott, Thursday, Aug. 9, 2018. (Les Stukenberg/Courier)

Rocks and water: For months to come, the two prominent Prescott features are expected to take center stage in the community.

Late last week, Jason Gisi with Arizona Eco Development (AED) filed applications for annexation of two parcels of land into Prescott city limits — one for 866 acres, and another for 1,656 acres.

That sets the stage for what is sure to be months of public consideration of AED’s plans to develop a total of about 2,735 homes in the area northeast of Prescott.

Myriad issues are still to come, but for now, the debate seems to be centering on the water allocation that AED has requested to serve the planned homes, as well as preservation of the Point of Rocks — the iconic fingerlike granite rock formation located along the Peavine Recreational Trail. 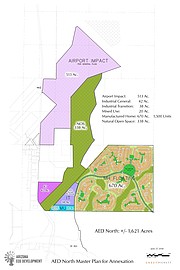 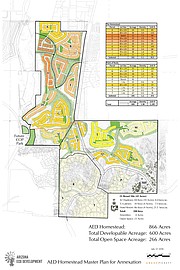 “It seems like it’s rocks and water,” Gisi said this week when summing up the coming debate. “That’s the starting point.”

Gisi says his plans call for the major rock formations in the area, including the Point of Rocks, to remain intact.

His application describes the development around the Point of Rocks as featuring “low density, custom lots” that will come with deed restrictions designating where the homes can be built “to ensure that building heights are limited to maximize view shed for residents of the neighborhood and public trail users alike.”

Still, members of the Granite Dells advocacy group “Save the Dells” have pushed for complete preservation of about 500 acres of the scenic area along the Peavine and Iron King trails and around the Point of Rocks.

In a news release this week, Save the Dells warns that the AED project as planned would “permanently destroy” the beauty of the Peavine and Iron King trails.

“AED wants to build more than 350 single family units — plus a 200-unit resort complex — within the majestic portion of the Granite Dells that Save the Dells has advocated for protecting as public open space,” states an eight-point statement from the organization.

The release adds: “Fully two-thirds of the length of the Peavine and Iron King trails through AED’s proposed development would be lined with homes, roads, drainage ditches, and cul-de-sacs, permanently destroying the trails’ aesthetic beauty — and the sense of wonder inspired by using them.”

While Gisi’s plans designate a number of open-space areas throughout the acreage, Save the Dells says the company should concentrate more of its open space in the Point of Rocks area.

Maintaining that AED would benefit greatly from its annexation into the city, the organization is pushing for open-space preservation “where the public wants it, not where it is most convenient for the developer.”

Prescott City Manager Michael Lamar said the applications submitted this past week were reflective of what has been discussed in recent months. “Based on the dialogue we’ve had, I’m not surprised by what it looks like,” he said.

All along, representatives from the city and the company have said the annexation application would be the starting point for negotiations about open space. Both Lamar and Gisi repeated that this week.

“We’ve heard from the community loud and clear about a desire for securing a larger section (of open space) near the Point of Rocks,” Lamar said.

How that might play out is still being determined.

Prescott Recreation Services Director Joe Baynes notes that the city has about $1.7 million of open-space preservation money remaining in its budget. Some or all of that could go toward preservation in the Point of Rocks area, he said, but added, “I think we’re just at the beginning of the negotiations.”

Water also will figure into the negotiations. Gisi said AED is asking for 300 acre-feet of water from the city, and is proposing bringing 375 acre-feet of water rights to the table, which would become a part of the city’s water portfolio.

Noting that the city has enough water in its portfolio to serve the AED project, Lamar said the City Council’s Water Issues Committee likely would be discussing the water request in coming months.

Overall, Lamar says, “The city feels its regulations in terms of infrastructure and road improvements are the best fit for a project of this magnitude.” If the project were to develop under county zoning rather than through annexation into the city, for instance, he said the Point of Rocks could become a part of a privately owned parcel, and “there would be no public access.”

Currently, Lamar said various city departments are reviewing the annexation requests, and a staff-level meeting is planned for next week to discuss the applications in more detail.

Gisi said he hopes the city will supply him with a list of its concerns in the coming weeks, which would set off the negotiations.

The next public discussion on the project likely will be at the Planning and Zoning Commission level. Gisi guesses that the first commission discussion might take place in late September or early October.

Upon the commission’s recommendation, a 60-day public-comment period will begin, after which the City Council would begin weighing in.

As a part of the Aug. 3 applications for two annexations requested in the Granite Dells area northeast of Prescott, Arizona Eco Development (AED) filed a number of key details.

Among the information included in the two dozen or so documents was: acreage of the two annexations; requested zoning designations; master plan maps; and legal descriptions.

The application information is available on the city’s website at: http://www.prescott-az.gov/business-development/planning/projects.

Gisi describes the AED South parcel as consisting of 866 acres east of Highway 89 and south of Highway 89A, and taking in the historic Point of Rocks as well as the old Wilkinson Homestead. As many as 1,185 homes are planned on the parcel.

The northern parcel is described as comprising 1,656.38 acres east of the Prescott Airport and north of the Granite Dells Parkway/Highway 89A interchange. A total of 1,550 homes are planned on the parcel.

While the northern parcel is considerably larger than the southern, it is the parcel near the Point of Rocks and popular Peavine Trail that generated the most controversy in early discussions.

Gisi is proposing a variety of zoning types on the south parcel, ranging from 5,000- to 10,000-square-foot lots in the flatter area in the northern stretches, to homes in the one-to-four-acre range in the southern area surrounding the Point of Rocks.