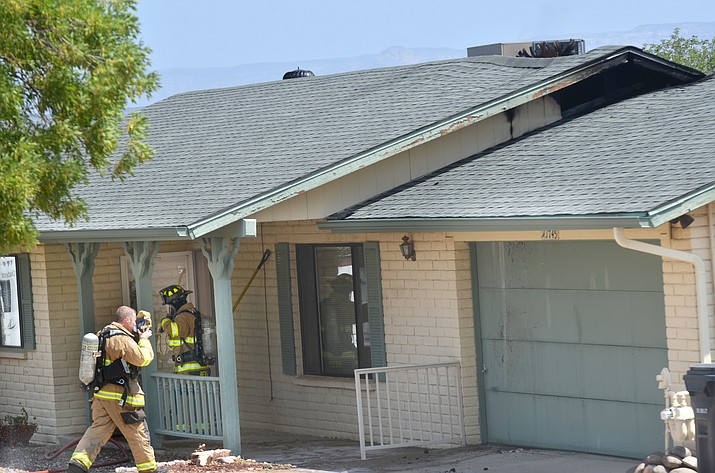 Firefighters inspect a home in Cottonwood Wednesday morning, Aug. 8, several hours after a lighting strike caused a fire in the home’s attic.

A lightning strike is believed to be the cause of this attic fire in the 1700 block of Contention Lane in Verde Village Wednesday, Aug. 8.

Due to a vigilant neighbor, an 83-year-old woman was able to safely escape her home in Cottonwood after a lightning strike set it on fire early Wednesday morning, Aug. 8, according to the Yavapai County Sheriff’s Office (YCSO).

At about 1:45 a.m., YCSO deputies were dispatched to the home in the 1700 block of South Contention Lane. When the first deputy arrived, Verde Valley Fire District personnel were on scene working to extinguish flames coming from the home’s attic.

The homeowner told deputies she was asleep and awoke to a loud lightning strike. However, she remained in bed and a few moments later heard someone knocking on her windows saying that her home was on fire. She grabbed her dog and escaped to safety, she said.

Deputies spoke with the witness neighbor who lives across the street from the involved home. He also heard the lightning strike and when he went outside, he saw his neighbor’s home on fire, he told deputies. He ran across the street to notify the homeowner and escort her to safety while calling 911.

The homeowner was able to contact a family friend and obtain a place to stay, YCSO reported.

Verde Valley Fire Chief Nazih Hazime said that with the help of Cottonwood Fired and Medical Department crews, fire personnel from both agency made “a fast interior offensive attack on the fire.”

“Fire crews were then able to transition into salvage and overhaul activities and tried to cover the homeowner’s property to prevent further damage,” Hazime said.