Howard: Tennis inventions and how we got here
My Point 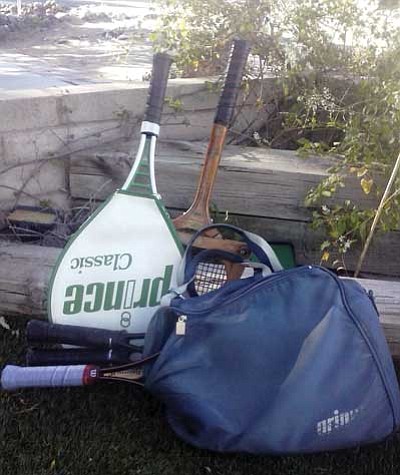 Chris Howard/Courtesy photo<br> A lifetime of tennis in a bag – from a wood racquet from the ’40s to a Prince Tour DB. They tell a story all their own.

The most basic parts of playing the game of tennis are taken for granted, things like a racquet, the ball, strings, rules and such.

They’ve been in place and developed for so long we no longer give them much of a thought.

We grab our racquets, open a can of balls and start playing. Did you ever think, who made the first tennis racquet and why?

The Italians have been credited with that first wood racquet, strung with gut during the 14th century.

Major Wingfield, who patented the modern game of tennis in 1874 in England, was the first to put together and sell a wood boxed set of 4 racquets, a net, balls, stakes and rules that he sold.

Interestingly metal racquets existed as early as 1889, but didn’t catch on.

Wood racquets were prevalent until 1967 when the steel Wilson T-2000 was made famous by Jimmy Connors, and the first oversize racquet came out in 1976, the Prince Classic that was made out of aluminum.

In 1980, graphite racquets got their beginning and in today’s world of racquets you can get a racquet based on weight, stiffness, type of material, hitting area, grip size, and even computer savvy with sensors giving you feedback on your stroke production.

When you purchase balls today, they are now USTA approved, regular or high altitude, optic yellow/green that are numbered.

Balls originally were made of leather by the Greeks and stuffed with anything soft. Early tennis balls were made in Scotland of hair and wool, but the modern tennis ball was born in New Haven Connecticut by Charles Goodyear when he found a way to turn gummy rubber into usable vulcanized rubber.

In the 1980’s, plastic cans with a full top pull-tab seal came out. Every year approximately 325 million balls are produced.

Some players take a lot of time, effort and thought into what type of string they put in their racquet, but early on with the game, you had only one choice, sheep intestine or sheep gut.

Nylon began as a monofilament but companies soon created a multi-strand technology.

Over the years other materials were added such as Kevlar, Zyex, Vectran, polyester, and polyurethane in various gauges. They created a mix of comfort, durability, power and spin, as well as countless combinations of main and cross string possibilities.

A new invention for racquets was put in place and patented beginning in 1977 called a bumper guard.

Through the 80s and 90s, they were improved and extend racquet frame and string longevity.

I know you’re getting a bit bored by now and are ready to go join your friends on the court, but now you have the knowledge of how the fun game of tennis and some of its equipment came to be.

Chris Howard is a local USPTA Tennis Professional with over 40 years in the racquet and fitness industry. He can be reached at 928-642-6775 or choward4541@gmail.com.

Column: Oldies become equipment goodies over the years
Howard: The changes in tennis - past, present, future?
Column: What's coming next in tennis?
My Point column: What’s next in the tennis world of inventions?
Column: Fond memories of wooden racquets
Event Calendar