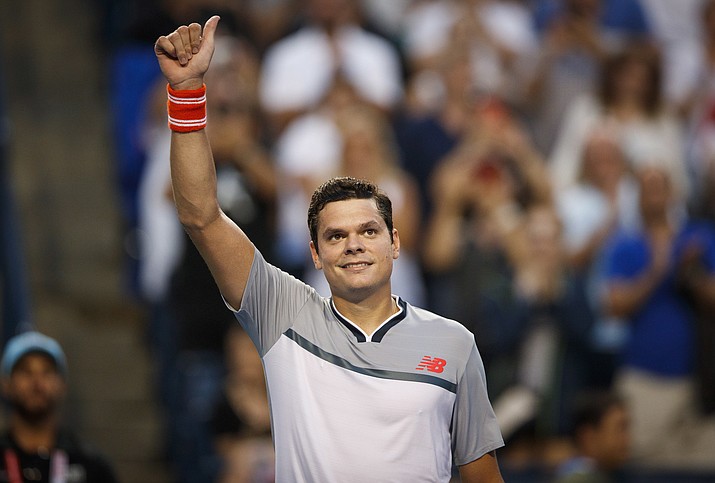 TORONTO — Canada’s Milos Raonic got off to a strong start at the Rogers Cup, beating David Goffin of Belgium 6-3, 6-4 on Monday.

Raonic, who has fallen from No. 3 to No. 30 due to numerous injuries the past sto seasons — including a quad tear at Wimbledon last month — used his powerful serve to his advantage, firing 13 aces to Goffin’s two and won 100 percent of his first serves.

“I think I can still serve much better, I don’t think I served particularly well,” Raonic said. “So I’ll take the time to work on some things tomorrow but overall it was a good performance. Mentally I was in the right state of mind the whole way through and I was very disciplined with myself.”

He will next play the winner of a match between American Frances Tiafoe and Italy’s Marco Cecchinato.

Russian qualifier Daniil Medvedev upset 13th-seeded American Jack Sock 6-3, 3-6, 6-3 in another first round match on a day play was interrupted for three hours due to rain.

Shapovalov and Auger-Aliassime started the match strong before Djokovic and Anderson took control. They broke Anderson’s serve for a 2-0 lead, to the delight of a tightly packed grandstand crowd. However, the Wimbledon finalists team — nicknamed Djokerson thanks to a Twitter poll conducted by Djokovic earlier in the day — broke back to tie the match 2-2, and again to go up 5-3.

“Our game was there, we didn’t feel intimidated at all,” the 19-year-old Shapovalov said.

“Just to have a chance to play with these guys is already good,” added Auger-Aliassime, who won’t turn 18 until later this week.

Also, 30-year-old Canadian Peter Polansky, a wild card entry playing in the morning draw, defeated Matthew Ebden of Australia 7-6 (3), 6-4. He will play the winner of a match between Djokovic and Hyeon Chung of South Korea in the second round.