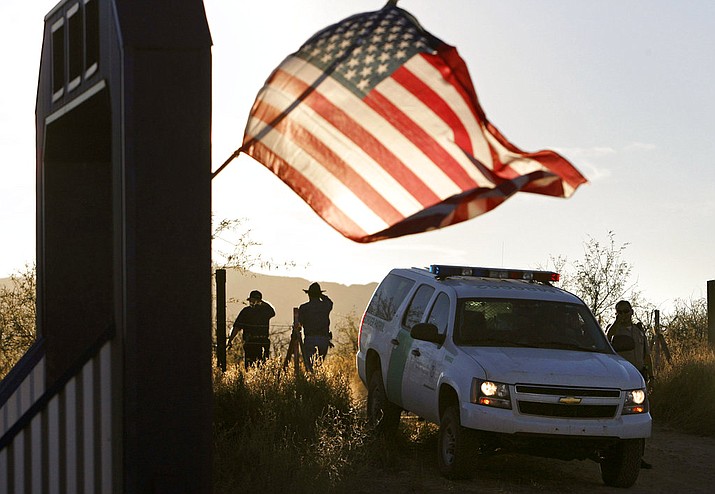 In this file photo, an American flag on a nearby resident's home waves in the breeze near a U.S. Border Patrol truck blocking the road leading to a search area near where Border Patrol Agent Brian Terry was killed northwest of Nogales, Ariz. (Greg Bryan/Arizona Daily Star via AP, 2010 File)

PHOENIX — A man extradited to the U.S. from Mexico this week has pleaded not guilty to charges of pulling the trigger in the slaying of a Border Patrol agent in Arizona eight years ago.

Osorio-Arellanes was arrested by Mexican authorities on April 12, 2017, and faces charges including first-degree murder.

He was among seven people charged in the 2010 slaying of 40-year-old Border Patrol Agent Brian Terry north of Nogales, Arizona.

Terry's killing publicly revealed the "Fast and Furious" operation, in which U.S. federal agents allowed criminals to buy firearms with the intention of tracking them to criminal organizations. But the U.S. Bureau of Alcohol, Tobacco, Firearms and Explosives lost track of most of the guns, including two found at scene of Terry's death.

The operation set off a political backlash against the Obama administration and prompted the agent's family to sue.

Terry was part of a four-man team in an elite Border Patrol unit staking out the southern Arizona desert on a mission to find "rip-off" crew members who rob drug smugglers. They encountered a group and identified themselves as police in trying to arrest them.

The men refused to stop, prompting an agent to fire bean bags at them. They responded by firing from AK-47-type assault rifles. Terry was struck in the back and died shortly afterward.

Three of six other defendants charged in the agent's killing have pleaded guilty, and two were convicted following a jury trial. The last of the seven, Jesus Rosario Favela-Astorga, was arrested in October and has not yet been tried.