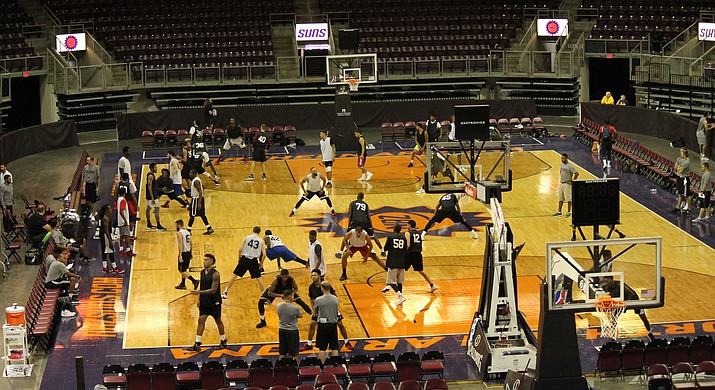 PRESCOTT VALLEY — For the third consecutive season, the Northern Arizona Suns will host two open tryouts prior to the upcoming campaign in Prescott Valley, the team announced Thursday afternoon.

Northern Arizona head coach Bret Burchard, along with several other Suns personnel, are scheduled to be on hand Sunday, Sept. 9, at the Prescott Valley Event Center, and Saturday, Sept. 15, at Talking Stick Resort Arena in Phoenix for an all-day tryout.

The first tryout in Prescott Valley on Sept. 9 is scheduled from 9 a.m. to 4 p.m., with check in beginning at 8 a.m. Participants must be 18 years of age or older, and pay a $150 fee for early registration. It is a $200 fee for the week of the tryout, and space is limited.

Players can register online for one or both tryouts at nazsuns.com/tryouts.

The Suns have invited seven local tryout players to training camp in the past two years, and four have made the team. Steven Green, who was undrafted out of Oklahoma Baptist University, tried out and played six games for the Suns during the 2017-18 season.

Gray, the most notable local tryout player in the Suns’ brief history in Prescott Valley, turned in an impressive rookie campaign and built on that in 2017-18, when he signed two 10-day contracts in the NBA. This summer, he played for the NBA Summer League’s Minnesota Timberwolves.