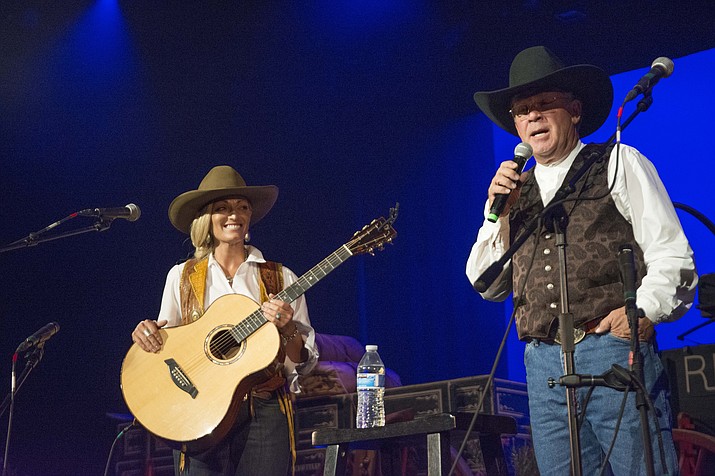 More than 40 authentic cowboy poets and singers are set to perform for two days and three nights next week for one of Prescott’s most popular events.

It’s the 31st annual Arizona Cowboy Poets Gathering with featured performers including Kevin Davis, Doris Daley and Jean and Gary Prescott and a theme of “Nightcap.”

This will be her first time back in Prescott since she performed at the Gathering in 2015, which was the first time she was ever in Prescott, said Daley, who lives on a ranch in Alberta, Canada.

“I’m thrilled to be coming back,” she said, calling the event one of everybody’s favorite gatherings of cowboy poets and singers. “It’s a real honor.”

Though she’s been writing poetry ever since she was a little girl, Daley said it wasn’t until the 1990s that she took the stage to perform in front of people. Prescott or not, it is a thrill to be able to write and perform something that connects with an audience, she said. She’s all for entertaining but when something hits home for someone is what makes it all worth it.

Daley said she’s someone who loves how words go together and while she takes her creative writing seriously, she has lots of fun with it. Branding herself as a western poet, Daley gathers inspiration from things anyone can understand, such as learning lessons or someone feeling the wind scorch across their face.

“All those things are universal,” she said. “I just wrap them up in western lingo.”

Held from Thursday to Saturday, Aug. 9-11, evening performances are at 7 p.m. with a full schedule of events throughout Friday and Saturday. The performances are at the Yavapai College Performing Arts Center, 1100 E. Sheldon St. Tickets range from $20 to $35 for each night, or $51 to $87 for all three nights, with a $4 service fee added to each ticket, which are available online at www.ycpac.com, www.azcowboypoets.org or at the door. All daytime sessions are free.

Also at the Gathering will be Gary Allegretto, a harmonica performer who will be performing Friday night. Allegretto said he’s been playing the harmonica since he was a kid when his grandfather gave him his harmonica.

“It became my passion right away,” he said, adding he’s just put out a new CD called “Blues on the Trail,” which has a lot of original music. “I’m looking forward to debuting it in Prescott.”

As a graduate of Northern Arizona University and having spent time as a Hotshot in Flagstaff, Allegretto said he’s sort of coming home. He’s also been a back-country forest ranger, cowboy and ranch hand.

In addition to the performance, Allegretto said he also has a harmonica workshop Saturday afternoon. It almost filled up last year and he urges people interested to get there early. Even those who have no musical ability will be able to glean from it.

“I’ll teach you to play three songs and have you laughing all the way through it,” he said.

He also has a harmonica workshop Thursday for the youths at the Yavapai County Juvenile Detention Facility. Allegretto said he’s taught thousands of children throughout the world and does so at a lot of detention centers.

The Arizona Cowboy Poets Gathering, which has maintained a standard of inviting men and women who are now or have been in the past part of the working cowboy’s environment and workplace, is respected as one of the best gatherings in the country due to maintaining the working cowboy culture and heritage, according to a news release.

“We really couldn’t do this large event without our hard-working volunteers that have dedicated their time to bring this to Prescott for the past 31 years,” said the Gathering’s Board President, Joe Konkel. “The culture of the real American Cowboy lives on stage here every year and it’s been an honor to bring this form of entertainment to locals and tourists alike.”