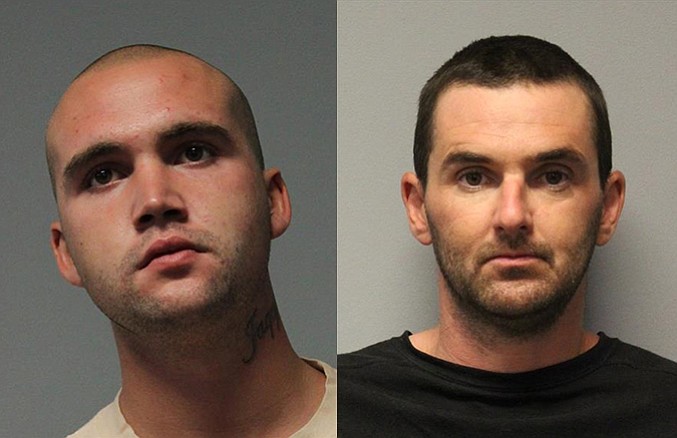 Aaron Martin, 20, of Verde Village, and Monty Pritchard, 33, of Cottonwood were arrested Wednesday morning, Aug. 1, for their alleged involvement in a drive-by shooting in Cottonwood.

Both suspects believed to be involved in a drive-by shooting in the Verde Village Tuesday night, July 31, have been arrested and booked into the Yavapai County jail in Camp Verde.

Monty Pritchard, 33, of Cottonwood, was booked on charges including facilitation of first degree murder, hindering prosecution and driving on a suspended license.

On July 31, around 7:30 p.m., Martin allegedly shot several rounds from a firearm toward a man seated on the front porch of a home in the 5900 block of East River Run Drive in Verde Village, said YCSO spokesperson Dwight D’Evelyn. Pritchard, who is on active parole, allegedly assisted the attempted murder by driving a vehicle past the home while Martin took aim from the passenger window.

“Although several rounds struck the home, Martin missed his target and fortunately no one in the home was injured,” D’Evelyn said.

The suspect vehicle was identified as a white hatchback and ultimately located by a YCSO deputy driving on Posse Trail in Verde Village. The suspect vehicle eventually stopped in the 2300 block of Posse Trail and both occupants ran from the vehicle on foot with a deputy in pursuit. Though they escaped arrest that evening, YCSO detectives found Martin early the next morning and Pritchard ended up turning himself in not long after, YCSO reported.

“After running from the suspect vehicle, [Pritchard] hid in a remote area near the river overnight until deciding to turn himself in this morning,” D’Evelyn said. “Pritchard also admitted assisting Martin with his efforts to hide from deputies.”

D’Evelyn said a firearm was recovered during the investigation.

“This dispute apparently involved a conflict between the 33-year-old victim and Martin regarding a relationship with a female,” D’Evelyn said.