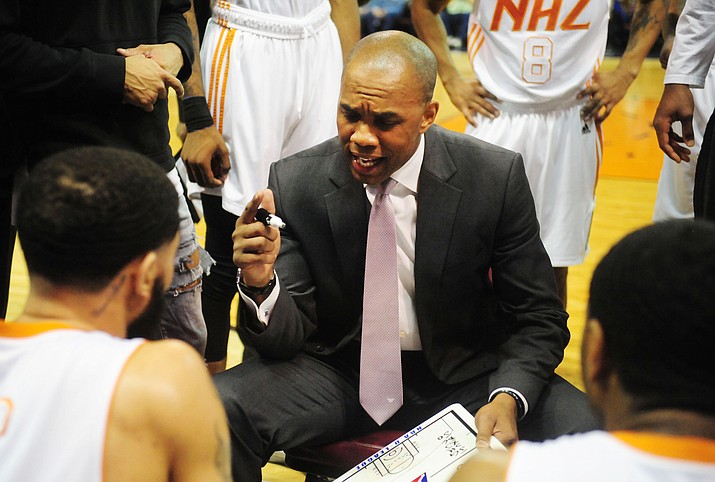 Former Northern Arizona Suns head coach Tyrone Ellis talks to his team during a timeout against the Santa Cruz Warriors on Dec. 14, 2016, in Prescott Valley. Ellis confirmed in a phone interview Wednesday, Aug. 1, 2018, that he will become the next head coach of the Stockton Kings, the NBA Gatorade League affiliate of the NBA’s Sacramento Kings. (Les Stukenberg/Courier, file)

PRESCOTT VALLEY — The coaching carousel between the NBA and its minor league NBA Gatorade League counterpart continued Wednesday when former Northern Arizona Suns head coach Tyrone Ellis confirmed he will become the next head coach of the Stockton Kings.

The Kings, a G League affiliate for the NBA’s Sacramento Kings, had not officially announced the hire as of Wednesday afternoon, but Ellis said his agent and the team were working out “minor” details of the contract and that he will likely sign as early as Thursday morning.

Ellis said he is looking forward to returning to the G League in Stockton, where the former Reno Bighorns relocated to and rebranded this offseason as the Kings.

“I’m ready to coach. I think, one of the best jobs, is a G League head coach. It’s extremely pure,” Ellis said in a phone interview Wednesday. “The players are young, hungry, and willing to do anything you ask of them. That’s the biggest thing I’m most excited about, to coach and develop.”

The 40-year-old Dallas native spent the 2016-17 season as the head coach of the Northern Arizona Suns during their inaugural season in Prescott Valley.

Ellis went into the 2017-18 season as the club’s head coach, but was promoted to the Phoenix Suns as an assistant under then-interim head coach Jay Triano, who took over after Earl Watson was fired after just three games.

Cody Toppert took over for Ellis just two days before the 2017-18 season began. Now Toppert is in Phoenix with the Suns as the director of player development and Bret Burchard, a former Ellis assistant, is the man in charge for Northern Arizona.

When asked about his time at the NBA level in Phoenix, Ellis said sometimes the “noise” can be hard to tune out with so much involved “outside of just pure coaching.”

“It’s more of a business at that level,” Ellis said, adding that the Suns are a first-class organization and that he appreciates the opportunity they provided him.

Now turning his attention on moving to Stockton, Ellis said when the Kings reached out, he was happy to take their call.

“The Kings reached out to me. I’m excited to go somewhere where I’m wanted. They value my ability to develop, and that’s the most important thing to me, is to grow,” Ellis said.

Ellis also thanked the community and the Suns fans in Prescott Valley for their support.

Adam Johnson of 2ways10days.com was the first to report the Kings hire of Ellis.