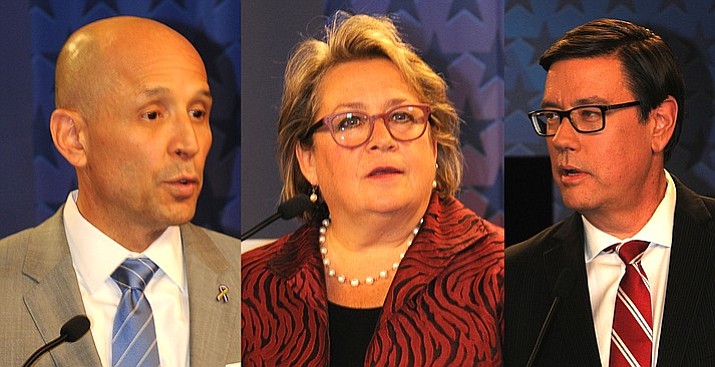 PHOENIX -- Kelly Fryer lashed out at her Democrat gubernatorial foes Tuesday for talking about ways to improve border security rather than dealing with the issue of immigration as a humanitarian problem.

"I have been with ranchers and I have seen hilltops near our borders in which there are guys with binoculars and AK-47s guarding the smuggling routes which are taking drugs into this country,'' said state Sen. Steve Farley during a televised debate. "That needs to be stopped.''

College education professor David Garcia said he wants a "balanced'' approach, recognizing the border as an asset while dealing with security.

"I reject this line of questioning,'' said Fryer, the head of the Southern Arizona YWCA.

"What we're talking about, for the most part, are people who are here in our country without the right paperwork,'' she said. "They're here and they're looking for help.''

Fryer said she understands there are people in this country who are afraid.

The three Democrats found more common ground on the issue of education funding.

All three said they support the #InvestInEd initiative, which would raise $690 million for education a year by imposing higher income tax rates on the highest income Arizonans.

And they rejected the idea that it's not fair to put the entire burden on perhaps just 1 percent of the state's residents.

"You pay the same amount if you make $5 million a year,'' she said.

Fryer acknowledged the mistake after the debate, but said she finds little difference between those two rates. Anyway, she said, imposing an 8 percent rate on earnings of more than $250,000 for individuals and 9 percent at the $500,000-plus range -- what the initiative would do -- simply returns the top tax rates to where they were in the 1970s.

Farley, for his part, said the money raised from the levy, if approved by voters, is just a start of what's needed. But he insisted there is no need for overall higher taxes.

He said the state, which has an annual budget of about $10 billion, foregoes about $13.7 billion a year in "corporate sales tax loopholes'' which exempt designed to exempt one industry or another from having to pay the 5.6 percent levy on their purchases.

He pointed out, for example, that 3-inch diameter pipe is subject to sales taxes; but a 4-inch pipe is not.

"That only makes sense if you're a corporation that buys a lot of 4-inch pipe in Arizona and wants to get a break.

Those "loopholes'' Farley cites, however, are not just special interest exemptions.

It includes decisions by state lawmakers not to tax certain services, everything from medical care to barbers. And it even includes an exemption for food purchased at grocery stores for home consumption.

Farley said, though, that just eliminating $3 billion of those exemptions -- he won't say which ones -- would allow the state to cut its sales taxes by 1 percentage point and still leave an extra $2 billion for public education.

Garcia also was unapologetic about raising more money for education on the backs of the highest wage earners.

"We are seeing our top income earners getting the benefit of wage increases,'' he said. What the ballot measure would do, Garcia said, is create a "more balanced'' tax system.

"We have one of the most regressive systems in Arizona,'' he said, one dependent largely on sales taxes. "Invest in Ed will help change that.''

But Fryer said focusing on where and how to find more money misses part of the point. The key, she said, is to repeal Proposition 108.

That 1992 voter-approved measure spells out that it takes a two-thirds vote of both the House and Senate to increase taxes or eliminate exemptions; cutting taxes or approving new exemptions takes just a simple majority.

"There are some folks in state government that fundamentally do not believe in government and have created these rules to make it difficult for us to raise the money that we need to take care of our priorities,'' she said.

But even if Fryer is elected governor she is powerless to change that because it would take a public vote to repeal the constitutional provision.

He said after Ducey became governor he fired about 150 auditors and collectors, people who Farley said each brought in far more from "tax cheats'' than their salaries, revenues the state could use to invest in schools, roads or other needs.

"Why would you do that unless you're governing from people who don't care about the quality of life in Arizona?'' he asked.

He said saying Ducey is doing the bidding of "people like his friend Grover Norquist,'' president of Americans for Tax Reform, who said he did not want to abolish government but "reduce it to the size where I can drag it into the bathroom and drown it in the bathtub.''

In pitching for votes, Garcia cited being a fourth-generation Arizonan and someone who does not take special interest money.

"My story is Arizona's story,'' he said.

Farley cited his 12 years as a state legislator, saying he has the "experience and understanding'' to head state government and his ability to work with Republicans.

And Fryer said it is that lack of experience in government that best qualifies her to deal with the state's problems.

"The last thing we need is another politician who promises to fix it,'' she said.