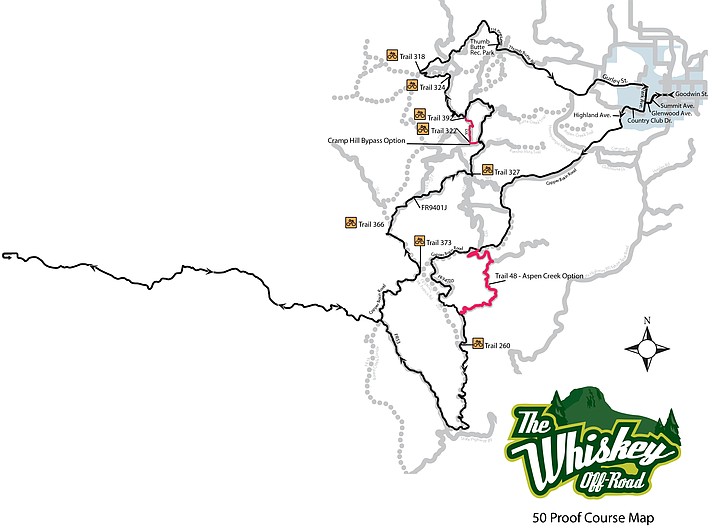 PRESCOTT — The more things change, the more they stay the same.

Although Frenchman Jean-Baptiste Alphonse Karr’s famous quote may not fully encapsulate the Whiskey Off-Road 50 Proof endurance mountain bike race’s course alterations through the years, a good case could be made in 2018.

Tucson-based Epic Rides, which will again put on the Whiskey today, April 27, through Sunday, April 29, in Prescott, announced course changes in February for the 15th annual race. Per usual, the 50 [mile] Proof amateur/pro course will still start and finish on Goodwin Street in downtown Prescott. However, instead of riders climbing old Senator Highway, which they had done for the past few years, they will revert to the original ingress and egress – heading west from downtown and up Copper Basin Road.

From there, Epic Rides had planned for the race route to go past Trail 48, turn left toward Upper Moby and hit the Trail 260 descent from the top. But Epic Rides’ Todd Sadow said that move generated some pushback from the Prescott mountain biking community, which wanted to show off its preferred trails.

So, Sadow received permission to add bonus miles to the course for those amateurs who want a tougher, rockier ride and/or more single-track for the April 28 race. The pros must ride Trail 48, however, and won’t have the amateurs’ options for their race April 29.

“The course will still go up Copper Basin, as planned, but now there’s going to be an option for [amateurs], that want to, to turn left onto 48 and do the waterfall and all that stuff on Aspen Creek,” Sadow said. “So, now that’s back in there, basically.”

At the end of the race, Epic Rides eliminated the creek crossing, an “area everyone loved,” Sadow said, because crowds congregating there were harming the vegetation that the U.S. Forest Service wants to protect.

“This was a chance to, one, get us pointing towards Spence Basin [in northwest Prescott, see related story], because we’re going to potentially keep growing into that area with more trails there,” Sadow said. “But then, also, take us away from that creek crossing where we’ve been having an undesirable impact as an audience on event weekend. And we add single-track and, as a result, we go to Garden Party and kind of make our way down the other side of the road on Thumb Butte.”

Sadow said Epic Rides had also initially removed Cramp Hill, which trails off of the Thumb Butte area toward the end of the race. But it, too, remains on the route. Amateurs can bypass the hill if they choose.

“By all means, we want the community proud of their course, and we also want to keep in mind the function of the event,” he added. “One of the problems is that these rides [the 15 Proof, 30 Proof and 50 Proof] have become too long.”

Over the past few years, Epic Rides altered where the 50 Proof race departed from downtown, heading south on old Senator Highway, or Mount Vernon Avenue.

“There were some property owners that didn’t entirely appreciate us utilizing the road that they lived off of,” Sadow said. “And although they were willing to accommodate the event, we just knew that we probably didn’t want to stay too long.”

By removing old Senator Highway from the route, it also eliminated the need to cross Highway 89 south on White Spar Road.

“It’s an unnecessary, sort of high-traffic road to cross,” Sadow said. “People really enjoyed the trails. Using 396 and Feldmeier were awesome, Wolverton and Jack Pine Road and, of course, that Circle Trail stuff.”